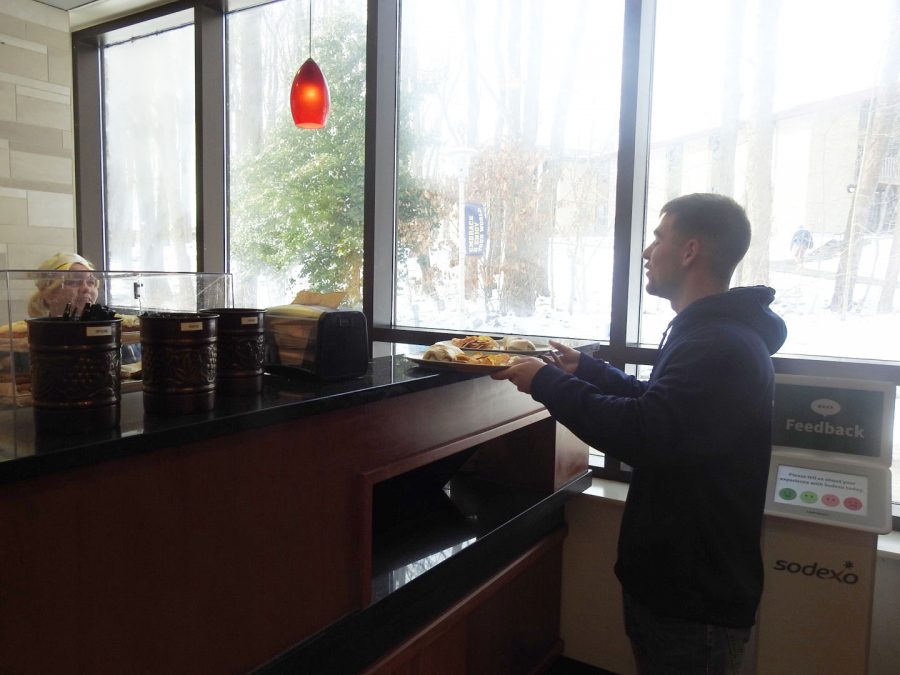 Senior Joe Romano picks up his food Jan. 9 at the Pitt Stop café where students can exchange one meal swipe per meal period for a combination of food options.

Since the meal exchange program was reinstated at the beginning of this academic year, students have been able to exchange one meal swipe for food at The Pitt Stop café. For some, however, one exchange for breakfast, lunch and dinner may not be enough.

Sophomore Alek Laurento said he would not mind being able to do two or three exchanges in a meal period. Sophomores Paityn Gabany and Sammi Faloon said they agree with him.

Student government President Devin Seiger confirmed that some students have raised similar concerns about the exchange program to student senators this year.

Dining Services Director Bob Knipple said that the one-meal-per-meal-period rule acts as a control measure because administrators cannot ensure that the student who’s doing the meal exchange is the person who eats the meal.

“In the Dining Hall, whenever you swipe in, we know that it’s you going in to eat,” Knipple said. “At The Pitt Stop, you’re swiping that meal exchange, we don’t know that you’re not taking that meal and saying ‘Here—have it.’”

He said administrators want the meal exchange program to have value.

“The meal exchange is for someone on the go. It’s a combo. They would get a breakfast sandwich, a piece of fruit and a drink.”

Knipple said it is impossible to tell whether the rule could be changed to allow additional meal exchanges in time for the 2020-21 academic year because the dining services contract is out for bid with contract specifications already in place.

According to Knipple, so far, four vendors have placed a bid for the contract.

“We’re in the process of identifying who the food service vendor will be effective July 1,” he said. “It could be Sodexo; it could be another vendor. I don’t know how things are going to be structured for the fall.”

Reports that Sodexo workers were allowing students to do more than one exchange per meal period in the past and that the rule had only recently started to be enforced were debunked by Sodexo General Manager Jim Butler.

“It’s not up to the workers because the system shouldn’t accept a second meal swipe. If they’re allowing it, then that means I’ve got a systemic problem,” Butler said. “I had not heard about it.”

Knipple said one way he would like to improve the meal exchange program is by allowing students to do an exchange for items in the Tuck Shop.

“It was offered several years ago in the Tuck Shop, and students were limited to one exchange per meal period then, too,” he said. “Under the earlier version, the program was more restrictive and could be used within a much narrower window of time per meal period.”

Students who have already done a meal exchange within a meal period can use dining dollars to purchase additional food at The Pitt Stop.

Laurento said he usually does not run out of dining dollars. Gabany and Faloon, however, said that they typically do.

Sophomore Zoukaa Ghassa said she thinks more meal exchanges should be allowed toward the end of a semester—a time when some students have no dining dollars left.

She said she has run out of dining dollars in the past but still had a lot of meals left in her meal plan.

“For me, by the end of the year, I was done with my points at the Tuck (Shop) because they have different kinds of stuff, so it’s easier to grab something and go eat,” Ghassa said.

With the meal exchange program in effect, campus administrators have eliminated the meals-to-dinning-dollars conversion program. Knipple said that decision was also partially made because new meal plan options were implemented this year, too.

The deadline for students to make changes to their meal plans was Jan. 8.

Knipple said students looking to utilize their meal swipes and to avoid eating in the dining hall could purchase a to-go container for the cost of one meal swipe.

“That’s something that’s been available for quite some time, and that was kind of like a predecessor to the meal exchange for students who were on the go.”

He said students can use it during any meal period and fill it from any of the dining hall’s stations.

“It’s one meal swipe to get the container, and then it’s another meal swipe to fill it. When you’re finished, you just bring it back, they’ll give you a new one. You don’t swipe again to get it.”