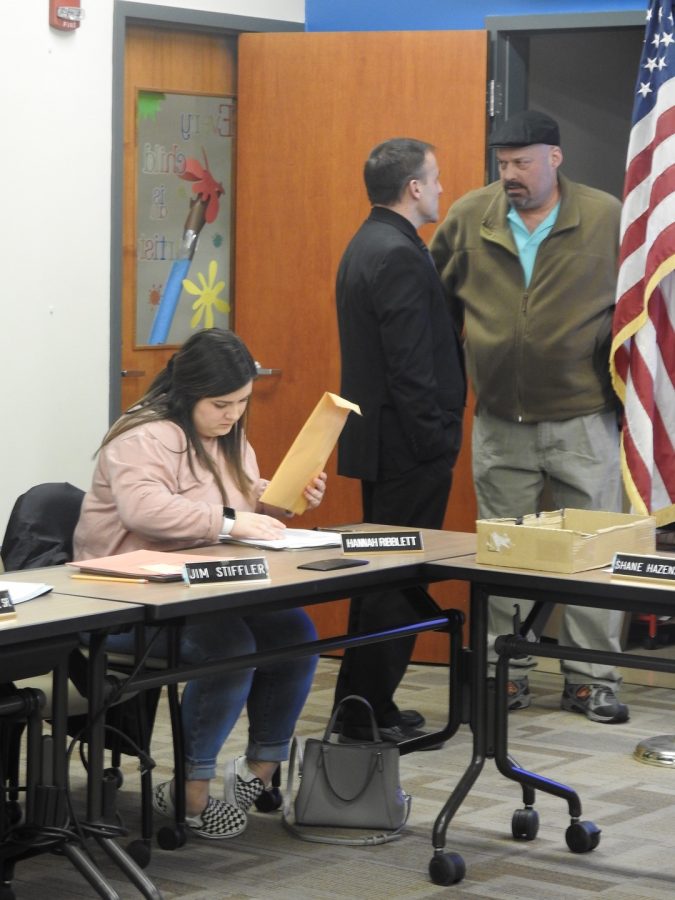 Freshman Hannah Ribblett prepares for a Jan. 9 Conemaugh Valley School Board meeting as Superintendent Shane Hazenstab (left) and board President Todd Roberts (right) have a conversation in the background.

She spends her weekday mornings driving a vanload of students to Conemaugh Valley School District before commuting to Pitt-Johnstown to study social studies secondary education.

The 18-year-old student is also a Conemaugh Valley School Board member. After being sworn in during the Dec. 3 meeting, she has a say in matters such as the district’s annual budget and personnel.

“There’s always hard decisions to make,” said Elementary Principal Rebecca Castiglione. “So, I think it’s going to be beneficial for her becoming an educator and very good for the district.

“It’s always good to have fresh ideas. Being informed in the civic capacity that she took on is tremendous.”

Superintendent Shane Hazenstab was the principal for most of Ribblett’s time as a student in high school. He said Ribblett’s classmates looked to her as a leader, and that he thinks she has been impressive board member so far.

“I can’t imagine doing this at 18, so, for her to take that chance is very impressive.

“She was always very pleasant, very mature for her age,” he said. “All the positive things you would say about a kid coming through school would apply to her.”

Ribblett said she had been encouraged to run for the school board by her former teacher, Katherine Rutledge.

“I was talking with my government teacher about the different things I saw that I wanted to change in the school, and she gave me the idea,” she said. “I really wanted to make a change and help the students.”

One of the changes Ribblett said she wants to make in the district is to introduce more technology in its schools.

“I’m trying to get a grant and trying to work on writing grants. I’m having some of my former teachers help me,” Ribblett said.

Castiglione said, while she doesn’t think technology can replace education, she supports Ribblett’s idea to have more of it in the district.

“That would only benefit our students, our district and our future,” she said. “And make us more competitive.”

Ribblett said she is also interested in working on the board’s athletic and curriculum committees.

“I just started so I’m trying to get the hang of it. Everyone on the board is helpful, and they’re excited to have me on there, too.”

Treasurer Donell Jacoby has been with the school board for 27 years. She said that there’s a learning curve for every new board member to listen and ask questions.

“She’s a smart girl, and she is listening a lot,” Jacoby said of Ribblett’s experience on the board so far. “Any new board member has to have a little bit of patience, there’s so many components to being on the school board.

“She’s just coming from the student population. I think she can bring a lot to the table,” she said.

Ribblett said she has always wanted to help change students’ lives for the better.

“Hopefully this gets me on the right track. It seems like a good process that I should learn,” she said of being on the school board.

“But I’m glad I have a lot of help along the way with the people on the board, my parents and everyone supporting me. I’m excited to see what the future holds.”