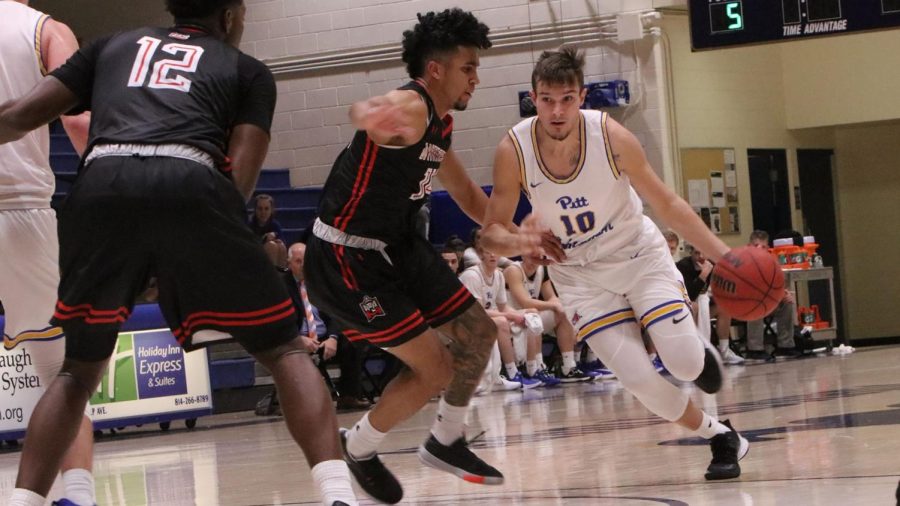 Drew Magestro is dribbling past a Mansfield opponent during a Jan. 29 game. He got 17 points. Pitt-Johnstown won the game 107-69.

The 38-point margin of victory is the biggest this season for the team. Pitt-Johnstown men’s basketball team has a 17-4 conference record.

“I told our guys to make more shots in the second half, and we needed to turn on the defense. I think Fred Mulbah is a phenomenal. He made 13 points, 12 assists and shot three out of five three-pointer in the game.

“He did a very good job, not only for himself but also for the whole. I thought Josh Wise played as well as he can play. He took good shots, scored, passed and rebounded.

According to Rukavina, he wants Mulbah to stand out not only for his good assists to teammates, but also for helping the team get more three-point shots.

“If he (Mulbah) keeps getting three-pointers like today, it’s going to make it very hard on opponents. They will dare him to shoot for three because they can’t stay in front of him.“We still have seven games remaining, and I told our guys that we put ourselves in the position to get to the NCAA tournament. We have to finish very strong, because there are only eight teams going to the NCAA tournament in our region.

“We need to keep going and finish strong,” Rukavina said.

Sophomore John Kromka, the Pitt-Johnstown men’s basketball team co-captain, credited beach players for contributing to the victory played well in the first half and made good on the second half.

“We have a great bench on our team to who support each other, and they played very well in the second half.

“When we led them by 42 points in the second half, our team handled the game very well,” Kromka said.

Wise, also a Pitt-Johnstown men’s basketball team co-captain, said they came out to play hard offense in this game.

“We took and made a lot of good shots. We didn’t play good defense in the first half, and that is what we want to do in the second half to play better defense than what we did.

“We had a very good team, many good guys play, and a bunch of really unselfish guys.Let’s get more big-win games in the rest of this season,” Wise said.