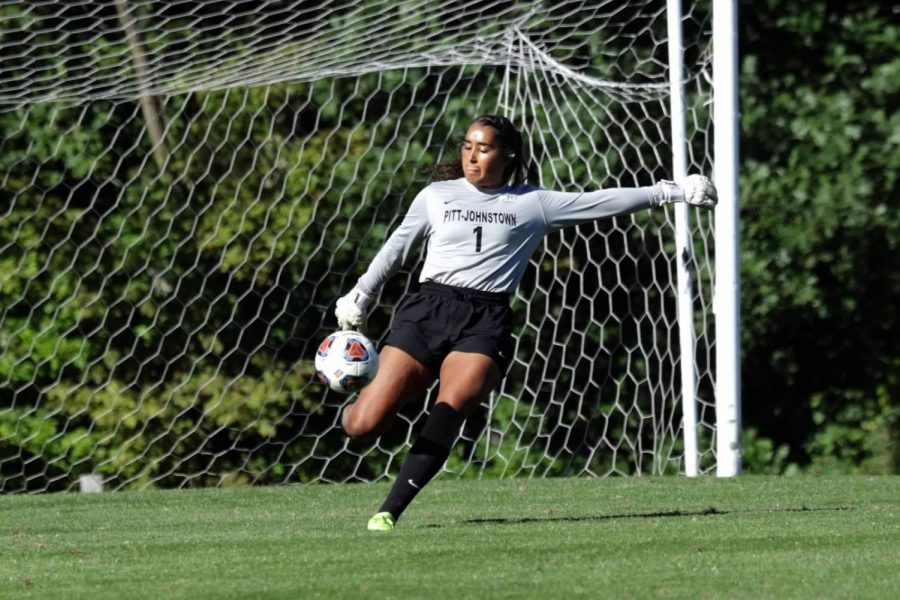 At 11: 29, Edinboro senior Danielle Chatten got the first goal in the game. Pitt-Johnstown senior McKendra Walker answered at 23:33 with a goal assisted by senior Kyra Watkins to tie Edinboro 1-1. At 50:04 Chatten got her second goal.

In the last minute, Pitt-Johnstown senior Marisa Lizins got the team’s fourth goal, ending the game with a 4-3 win. It’s the first time the Pitt-Johnstown women’s soccer team beat Edinboro.

Vito Addalli, the Pitt-Johnstown head women’s soccer coach, said their 2019 season has been a success from a program perspective.

“We increased our win total by two and broke a handful of records for program history. We had big expectations coming in and wanted to make the playoffs this year but fell just short. We’re getting closer to our main prize, and the excitement is only growing.

“We need to be more consistent with our play and make sure to capitalize on more of our chances.

As long as we continue to hold ourselves accountable and raise the standards, our culture will solidify itself over time. Once that happens, we’ll be able to win a majority of the close games while also beating the top-ranked teams on a consistent basis.

“I am very proud of our team first and foremost. We ended our season on a three-game winning streak in dramatic fashion. Plenty of these memories that will last forever, and it’s a great way for our seniors to go out.

“The entire team is an amazing group of ladies who continue to lift each other up while performing at a high level.  The anticipation for next season is growing, and we can’t wait to get the ball rolling again,” Addalli said.

“I think my performance has contributed to the team in a positive way, and I plan on continuing to help the team even more.

“I try to be a leader and play my hardest and keep the tempo on the field fast so we can keep moving the ball and create opportunities. We all have our strong points on the field, and that’s what makes our team so special.

“My role is normally to dribble on the attack and be able to dish it off to other players to either cross it in or shoot. When the shot is open, I will shoot it and hope for the best. LaDuke and I have a good connection when we are on the field.

“I can count on her (LaDuke) to finish any ball I give her or to even make a good play out of it. Most of the time we know where each other is on the field and are very good at finding each other. That’s been a big factor in our scoring,” Esser said.

LaDuke, the Pitt-Johnstown women’s soccer captain, said she couldn’t believe that this season has ended.

“We broke many school records this year. We made the first home conference win on this field, beat Indiana (Pa.) and California (Pa.) twice in one season, had our best PSAC conference record with 5-1, and beat Edinboro for the first time.

“I think this season is a big thing. We broke many records and have more confidence. Through this season, we realized that we’re competitive with anyone and could beat any team. I’m so proud of my whole team. Thanks to all the seniors, and we’ll miss them,” LaDuke said.

Lizins, who got the last goal against Edinboro, said she didn’t know what happened at that moment.

“I feel so great. I had my best performance  this season. This is also my first goal in this season. I’m so excited.

“In the beginning of this season, it took time for us to get started. We changed our minds and worked on it, so we kept winning games until the last game of the season.

“My team works together, and we helped each other get this honor. Everyone on my team knows what we should do.

“I can see the huge transition in my team from my freshman to senior year. We improved a lot, from winning only one game in the conference up to seven winning games in the conference,” Lizins said.

Goalie senior Maria Mosquera, who got 18 game points on saves per game and had 121 saves this season, said she couldn’t feel more blessed to have been a part of this team.

“I sat on the bench for the first three years, and had one year to play. I tried my very best to help my team in any way possible throughout the entire year.

“The biggest transition I have seen is that we actually played soccer. We passed the ball and didn’t just play kick and chase.

“I want my team to know that I love every single player. My team became my family. I wish nothing but the best in the upcoming years.

“I worked so hard over the past two years to be in the best shape I could be for this season,” Mosquera said.