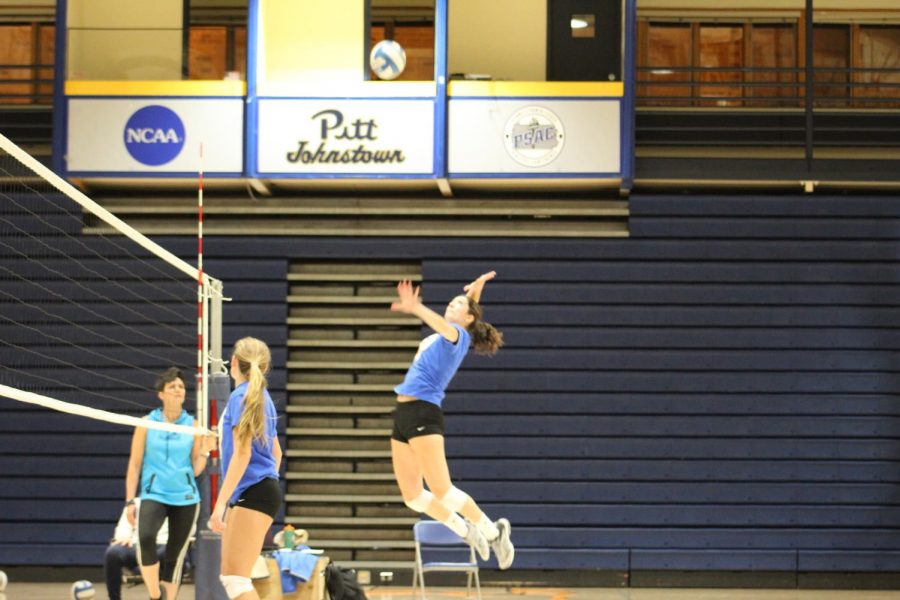 The Pitt-Johnstown women’s volleyball team won four matches in a row from Oct. 15 to Oct. 22.

Justin Haupt, the Pitt-Johnstown head volleyball coach, said they have started an engine to win.

“We focused heavily on playing consistently and using communication and energy to our advantage. I think any time you go through a rough stretch in any sport, doubt can take over.

“Going on a four-match winning streak has been very beneficial in a lot of ways. Most importantly is in how the girls are approaching each game mentally.

“We want to play to the best of our ability.  We feel that if we do, we will be very happy with the outcome at the end of the season.

“I’m really proud of the way our girls responded after a shaky start to conference play; that is a testament to their resiliency.  I’m really excited to see what they can overcome the rest of the season,” Haupt said.

“Winning games is very important for them. Volleyball is a team sport. They need to save the ball, then pass the ball and connect to kill for points. They need to have chemistry with each other in the game.

“When the team started to win, it’s like a gel opened up and wouldn’t stop. Winning helps the team figure out where they are, and what they should do in their positions against different teams.

“I love the whole team and want to see the program do well,” Gearhart said.

Senior Noelle Carota, the conference Southwest Division Volleyball Athlete of the Week for Oct. 14 to 20, said it was her first time to be named an athlete of the week.

“I feel so happy to get paid off for hard work. Without my teammates’ support, I can’t get it.

“We started slowly this season, but we are on the way up. All of our team is working for one thing.

“We’re going to focus on winning conference game one by one. Then, I hope we can go to a playoff game, and finally finish with conference championship. Go out with a bang,” Carota said.

Sophomore Rebecca Miller, a middle hitter, said they already turned the play over in two weeks.

“We want to win games, and that’s what we want. We found how to win the games and realized that we have the potential to win more games the rest of the season.

“We’ll keep looking at our team goal moving forward the rest of this season,” Miller said.

“Our momentum came back to our team, and it’s time for us to stand out. Since we started to win, it’s going to hard to stop,” Gechter said.