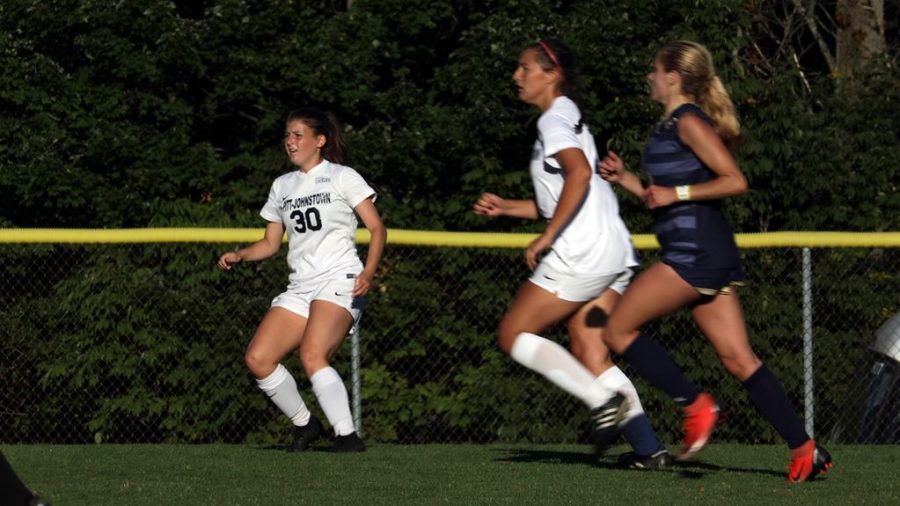 “In the beginning, I thought this is going to be an easy game, but we didn’t play well that day.

“In the game, Pitt-Johnstown women controlled the momentum and atmosphere. We didn’t play as well as we are used to.

“In the past nine years, I saw the transition and improvement with Pitt-Johnstown women’s soccer,” Heder said. “They hired a good coach and their program became better.

“I knew that Pitt-Johnstown women’s soccer could give more scholarships than our program, so they recruit good players. But we’ll keep working hard the rest of this season,” Heder said.

Vito Addalli, the Pitt-Johnstown head women’s soccer coach, said, in the game his players felt better than the last game (a 0-3 loss against Mercyhurst University Sept. 25).

“Last year we didn’t have many shots competing against Indiana (Pa.). We knew what our problems were and we did better.

“We move more around this field to create more chances to shoot, and our defense is good.

“We did it with our team, not any individual, and used every chance to score,” Addalli said.

“Our energy was high in this game. We work hard with our positive mindset in every game and practice, and it translated into this game.

“We focus more on the game. After I watched the previous matches, I discovered our weakness in defense, and we found a solution to that. We definitely got payback.

“We don’t like to lose games. But when we lose a game, it pushes hard on us to get better.

“That’s why this game looks better, and every little change make  for a different result.

“There are three more games in the first round, and the second round is going to start soon,” Addalli said, “We’re going to win more games and move forward.We won’t stop, and we’ll win more games,” Addali said.

Senior Brooke Vollmer, the first scorer in the Indiana (Pa.) game at 9:44 with an assist from Junior Kim Mixon,  said they have a good team this year.

“We prepared very well in this game, and it paid off today,” Vollmer said.

“It’s my first goal this season, and the fourth goal in my whole career at Pitt-Johnstown.

“I used to have one goal in each season, but I hope I’ll have more this season.

“There are many freshmen coming up every year, and this will bring us fresh blood, ideas and movement to our team.

“Everyone connects with each other as a team, and it’s important. From my freshman to senior year, I can see the change.

“We opened our views and know where we should go to help our team. We have more ideas and knowledge and our talent came out, and grew as a team.

“We’re going to keep working hard, and winning more games in the rest of this season,” Vollmer said.

Junior Abby LaDuke, the second scorer in the game at 76:08 with an assist from sophomore Emily Esser, said she was excited to win the game (against Indiana (Pa.) ) on the home field.

“This is my fourth goal this season, and it’s also my 10th goal at Pitt-Johnstown.

“We used to lose to Indiana (Pa.) and this is the time for us to stand out and show the potential.

“Our defense is awesome, and our goalkeeper, Maria Mosquera, did a good job in this game. We didn’t have a lot of shots in this game, but we scored and made the goals,” LaDuke said.

“On Sept. 25, we didn’t play well, and figured out our problems. We focused on our problems and came out in this game.

“We felt like a team today, and everyone is doing good with their job.

“I hope that we can keep it up for the rest of this season,” LaDuke said.

Mosquera, said she was happy that her team beat Indiana (Pa.). We were better prepared mentally, technically, and physically than ever before.

“The hard work is paying off, and we want it to continue into these following weeks,” Mosquera said.