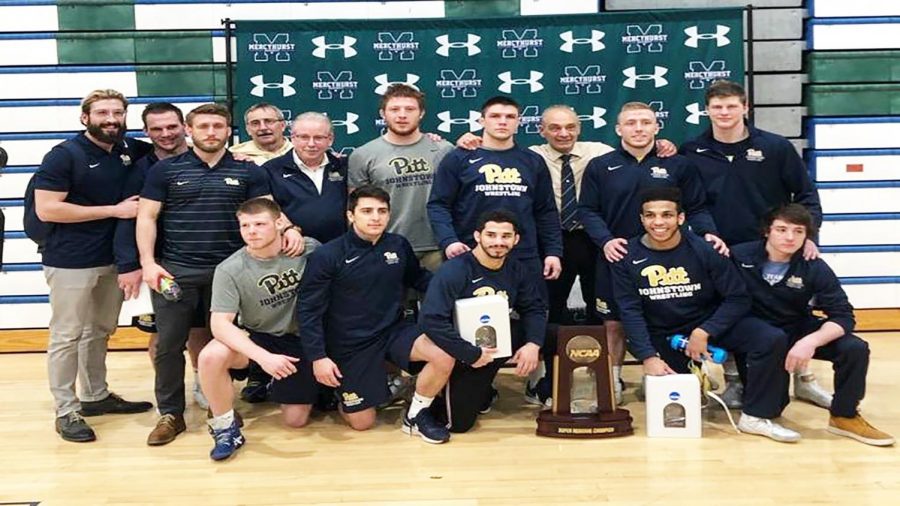 The Pitt-Johnstown wrestlers finsihed with a  16-3 dual meet record, and they won the team championship for their NCAA Region. In  the super regional I tournament there were three Pitt-Johnstown first-place winners, three runners-up, and one third place, and all seven qualified to the NCAA national tournament in their respective weight classes.

The Mountain Cat wrestling team won by 39 points over the runner-up in the regional tournament.

“They (the seven qualifiers) are going to meet 17 athletes in their weight class on Friday to be on the way of their individual national champions,” Pecora said.

“We will keep the same two types of training for Mountain Cat wrestlers for the NCAA tournament.

“Each assistant coach is going to have three or four individual wrestlers for individual training.

“The NCAA championship is every athletes’ goal.

“They are going to compete with 17 athletes in two days with at least two matches in one day to  be NCAA national champion.

“It’s the time for young men to be the best that they can be in the nation,” Pecora said.

“It’s my second year to be qualified for the NCAA tournament.

“I feel much better this year.

“Our team is stronger all around,” Falleroni said.

Another qualifier is senior Levi Niebauer in the 197-pound weight-class.

“It was my third time qualifying for the national tournament.

“Everything for my team is getting better and better,” Niebauer said.

Another qualifier is junior Devin Austin, who placed third in  the regional tournamnt in the 165-pound weight class.

“It is also my third year qualifying for the national tournament,” Austin said.

Redshirt freshman  Brock Biddle was a regional second-place winner in the 184-pound weight class.  However, Biddle suffered an  injury in his left eye in a bout during the tournament.

“I had a headache after I stood up, and this wound had a negative effect on my performance.

“I didn’t get the championship in the regional tournament.

“When it’s time for the national tournament, all of the records are going to start at zero.

“I’m on the right track to focus.

“I won’t give up to beat Jeff Reimel (184-pound national champion last year) in the NCAA tournament.” Biddle said.

Another junior, Brendan Howard (a transfer from Clarion University last year) was a regional champion in the 125-pound weight class, and he qualified for the national tournament.

“It felt more like a family in here, and it’s consistent and makes me feel better.

“I have improved from sixth place (in 2018) to champion this year, and I have been working hard through the whole year

“There was no individual training when I was in Clarion.

“I got individual training after I came to Pitt-Johnstown.

“I have improved a lot from individual training because the team training is almost same as it was in Clarion University,” Howard said.