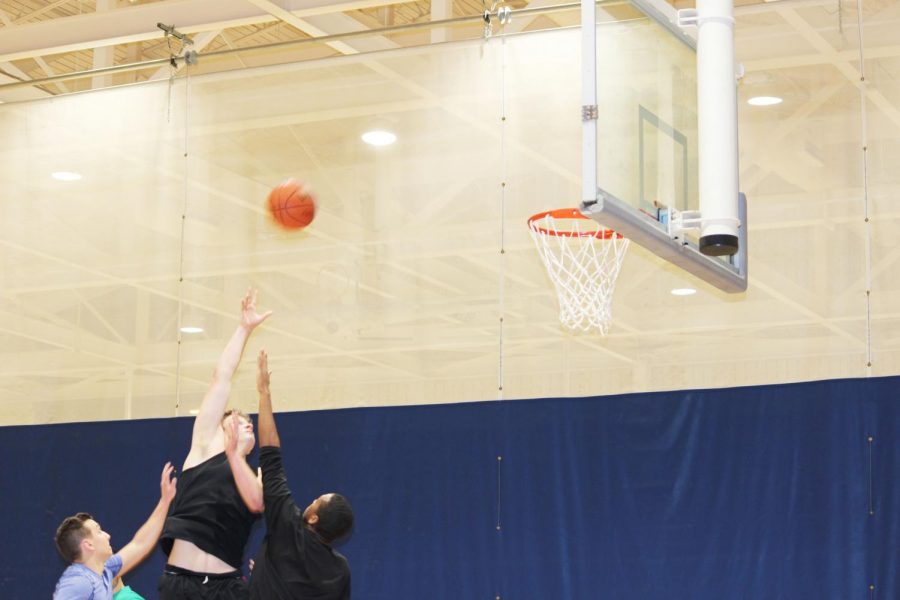 Matt Holsinger shoots the ball against two oppenents at the three vs three basketball helping Melo is Trash winning the game Jan. 28 in the Wellness Center.

Six teams are to compete in two matches every Monday and Wednesday through Feb. 25.

Freshman Matt Holsinger, a player on the Pitt-Johnstown men’s basketball team, said he wants to get extra practice in intramural competition.

He is part of a team named Melo is trash. Most   team members are freshmen, Holsinger said, and they have a long away to go if they want to be champions.

“My weekday schedule is not too bad. I always have been a student athlete, so balancing this (competition  and basketball training) is not difficult.

“(I think) the PSAC is significantly more challenging. I enjoy playing basketball and having fun doing it,” Holsinger said.

Senior Jayshawn Whitfield registered for two teams, Young Kings and ’16 76ers as a player. He said intramurals give him a chance to work out and win something.

“I’ve always been competitive. Games are in the evenings, so it usually works with my schedule.

“It’s fun, and I can usually get a good workout. I love that I can win prizes at the end of each season,” Whitfield said.

Senior Jake Zembower, Intramural Sports Supervisor, said he will send emails to inform team players about their opponents’ information and the intramural schedule.

“Sometimes, they just don’t show up,” Zembower said, and then he had to tell the next game’s teams to start early.

“Some of them are great athletes, and a few of them could probably do sports here.

“Some people’s performance is actually quite impressive,” Zembower said.