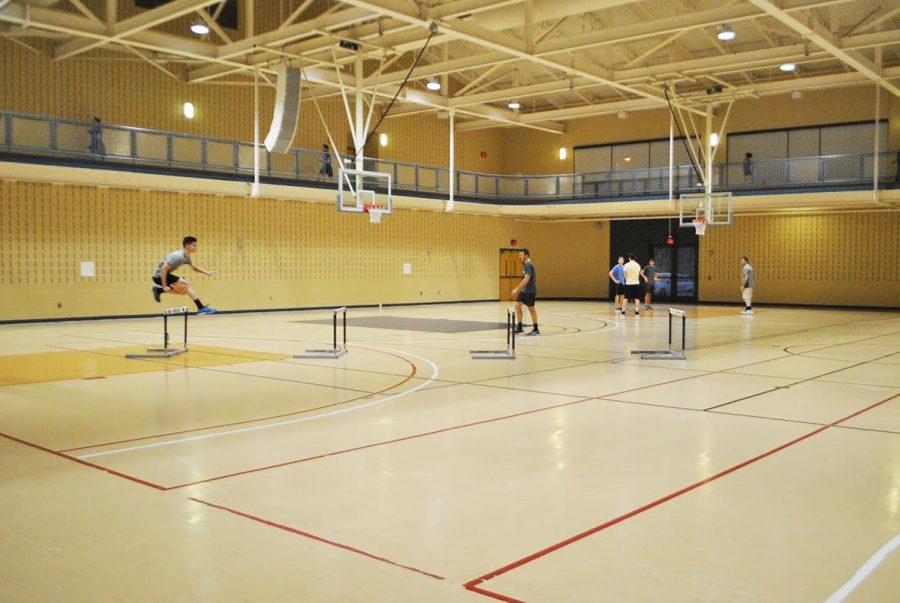 Freshman John Paronish (left) leaps over a hurdle during a track and field team practice at the Wellness Center Jan 23.

It was bitterly cold during Martin Luther King Jr. Day, and there were no classes held, but the track and field team and other athletes were training at the Wellness Center.

“Weather doesn’t really bother me since I live on campus, and we also practice inside,” sophomore Samantha Klutz said.

“Anything outside can be done on a treadmill; it does make it more difficult,” senior Luca Pugliano said.

Senior Matt Karlheim got bitten by a dog over the weekend off campus while he was working, but he kept training.

“I get it wrapped before practice to keep it from hurting me while running,” he said.

“I anticipate to be able to run without it hurting me by Thursday.”

“I’d rather continue training since we are in season right now,” Klutz said.

“Normally, if we were outside, it would put a damper on the feeling during practice and would make it harder to train,” Karlheim said.

“We are roughly halfway through the indoor season, so we cannot afford to take a break on this day off.

“This would affect our training schedule and cause us to be under prepared for the upcoming meet this weekend,” Karlheim said.

“Our training cycle is typically two weeks long at a time with a rest day on the 14th day of the cycle. We still find time to get our workouts in on the holidays,” Pugliano said.

“We have put in a lot of work ever since school started to prepare for the season, so taking days off because they are holidays would not be a good choice,” Karlheim said.

“While it would be nice to have a break over holidays, (it’s) not us.”

“We have plenty of fresh talent in freshmen and newcomers on the team and hope to develop them to give our team the depth it needs,” Karlheim said.