Some shine at first invitational meet 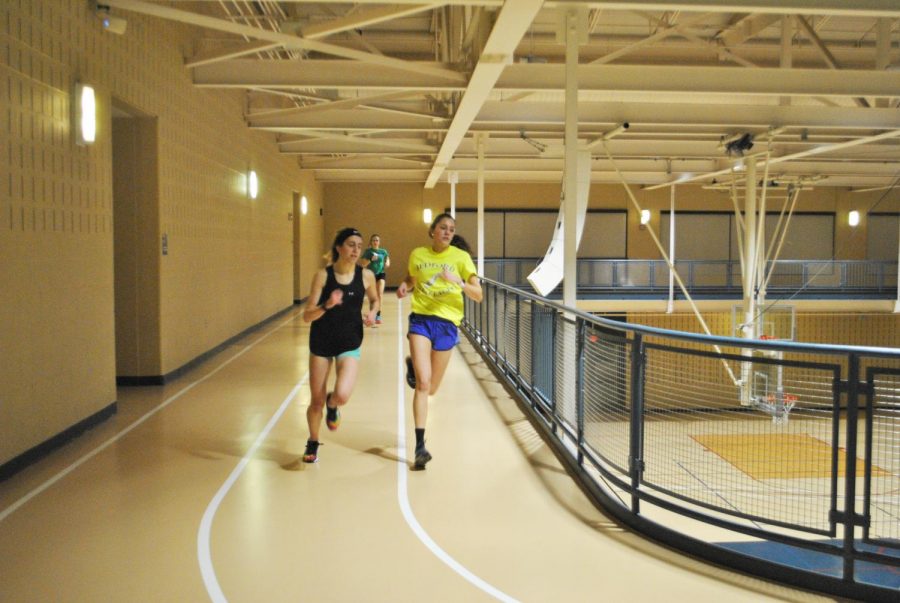 The women’s track and field team trains Jan. 16 in the Wellness Center, running laps around the track above the gym.

There were three  first-place winners in Pitt-Johnstown men’s track and field team on Jan. 11 in the West Virginia University Indoor Track and Field open in Morgantown, West Virginia.

The first competition in 2019 showed that the  team has improved since 2018.

Senior Matt Karlheim placed first in the 400-meter dash and was runner-up in the 60-meter dash.

”This was a good start to the season, especially for the freshmen, as it is a good starting point,” Karlheim said.

To be qualified for the conference meet, Karlheim needs to run the 400-meter dash in under 49.94 seconds. He ran it in 51.6 seconds in West Virginia.

“My goal is to hit the national qualifying mark, as I have been close to hitting it in previous seasons,” Karlheim said.

“Athletes are not expected to be the best in their freshman year before, but we have changed to make another plan. We want their most in their last meet,” Keifer said.

Karlheim said he was not satisfied with his result, even though he won  first place.

“While I wasn’t too happy with the times, as I am never happy unless they are new bests, I am glad that they were close to my personal bests,” Karlheim said.

He said he trained with assistant coach Chris Matava, who kept yelling, “faster.”

Sophomore Connor Harriman placed first in the mile run and fifth in the 800-meter dash.

Keifer said that Harriman has more potential to be qualified as an  All- American, and they need to  bring his potential out to the fullest.

Senior Luca Pugliano won first in the 800-meter dash and second, behind Harriman, in the mile run.

“It’s a good start for me in this season. It’s a solid start to the season and I’m  looking to build off of that,” Pugliano said.

“That would break the school record and give me a solid place at conference,” Pugliano said.

“It was a smaller meet, but we saw some solid competition.  My plan to achieve my goals is to work hard and try to get outside as much as possible. It’s hard to get a real quality workouts inside,” Pugliano said.

“We’re looking forward to a great season. It could be the track team’s best season to date.”

Sophomore Samantha Klutz finished fourth in the 800-meter run “I had run it last year as more of a workout, but I wouldn’t mind running it again for fun,” Klutz said, as she was sliding on the wall, trying to catch her breath, Klutz said.

“I hope to run under 2:20 in the 800-meter and continue training every day and push past myself.”

“I separated them in two different groups to reset training. One is a faster group, the other is a slower group,” Keifer said.

Running as a group is helpful to athletes, “It really helps to have such  great ladies (in the) middle distance team to run with every day,” Klutz said.

She said that running with groups is a good way to help each other, and  that she wants to continue training every day and push past her limits.

“We push each other a lot, which is going to help us on the track,” Klutz said.

After the good results coming out from the open, Keifer said that he has set up different training plans for the different athletes.

Senior Kia Clayton was the runner-up in the long jump and qualified for the conference Indoor Championships with a jump of 17 feet and 4.5 inches. Her  best result of last year was 17 feet and 4 inches.

Clayton said she had a clear mind during the competition.

“Last Friday’s competition was kind of like an introductory meet,” Clayton said.

Clayton said that she has more confidence about the triple jump.

Keifer said that Clayton was just four centermeters away from being qualified in the triple jump last year.

To help the jump group meet the standard to qualify athletes for the conference meet, Keifer set a new training plan for jumpers.

Clayton said they have been doing more running recently.

She said getting  more training for now is helpful.

“I’ve come out with a much better jump this year than I had at this time last year, so hopefully, it can only get better from here,” Clayton said.

Senior Katie Lippincott was the runner-up in the high jump, at 5 feet and 3 inches, improved by a quater-inch from last year.

“This is my last season to compete. I hope to set multiple personal records, (like) exceeding 5 feet and 5 inches in the high jump.”

“I am ready for a fun-filled season,” Lippincott said.

Lippincott said she agreed with Clayton that the training has been helpful.

There are good results on the weight throw group, too.

Sophomore Kivana Hill set a school record and placed third with throw of 40 feet and 7.5 inches.

Sophomore Nick Gongaware was third and qualified for the conference championships in the weight  throw, throwing a distance of 46 feet and 9 inches.