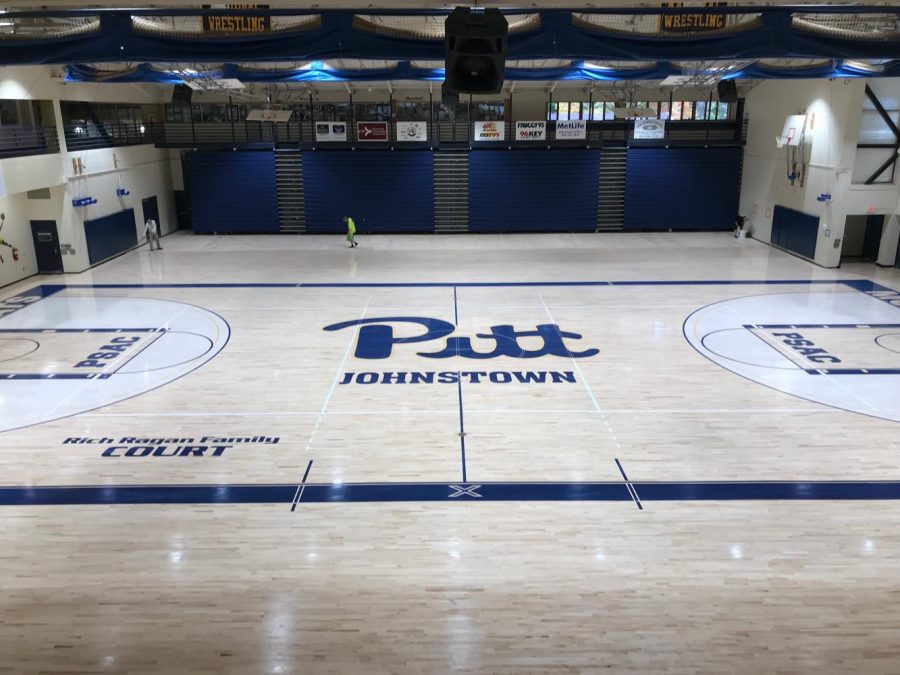 The Pitt-Johnstown Sports Center received a $211,500 renovation that placed hardwood over the old composite floor. The renovation was completed by S&S Flooring in Ambridge, Beaver County. The Pitt-Johnstown men’s and women’s basketball team had their first practice on the new floor Sunday.

Pitt-Johnstown men’s basketball team had their first official practice of the season Saturday.

The Mountain Cats finished 13-9 in conference play and 19-11 overall in the 2016-17 season. Losing to Gannon University, 77-67, in the quarterfinals of the conference tournament.

Vescovi was also named to the College Sports Information Directors of America First-Team Academic, All-District II with a 3.99 GPA in secondary Education-Mathematics.

“The game against Gannon last year we lost in the last couple possessions. We have to finish with the same intensity we start with,” Clancy said.

Senior forward Isaac Vescovi echoed Clancy and said closing out games is something the team needs to improve along with rebounding.

“Personally, I want to improve my rebounding. I think if I can rebound better than last year, (the team) will be in great shape. We lost a few close games we could have won, and we got badly outrebounded against a few teams,” Vescovi said.

Last year, the Mountain Cats ranked fifth in the conference giving up 71.9 points per games.

“Everyone’s been working really hard and competing to fill in the roles of the seniors we lost last season,” he said.

The Mountain Cats will be looking to replace their leading scorer, A.J. Leahey who averaged 17.7 pointes per game and shooting 48.7% on 3-pointers.

New additions to the team include freshmen guard Steven Votodian from Pittsburgh Central Catholic; guard Drew Magestro and forward Marcin Wiszomirski, both from Kennedy Catholic along with guard Darrell Brock from First Love Christian Academy, who is expected to redshirt this year.

Clancy said the freshmen are fitting into the team’s system pretty well.

“All of them play as if they already have some kind of college experience,” he said.

Masua said the new Sports Center floor is going to be fun to play on, too.

“The floor definitely pops out at you when you walk in the gym and just knowing that it’s our floor is nice, and we must defend it every game,” he said.

The Mountain Cats are to begin the 2017-18 season with games against Virginia State University and Urbana (Ohio) University Nov. 10 and 11 at the Indiana University (Pa.) Tip-Off, presented by Indiana Regional Medical Center and Hilton Garden Inn.

Both the men and women basketball teams make their home debuts Nov. 18 and 19 on the newly renovated Sports Center floor with conference games against Bloomsburg University and East Stroudsburg University.

The Mountain Cats are scheduled to play 13 home games, headlined by No. 3 ranked Indiana (Pa.) University.