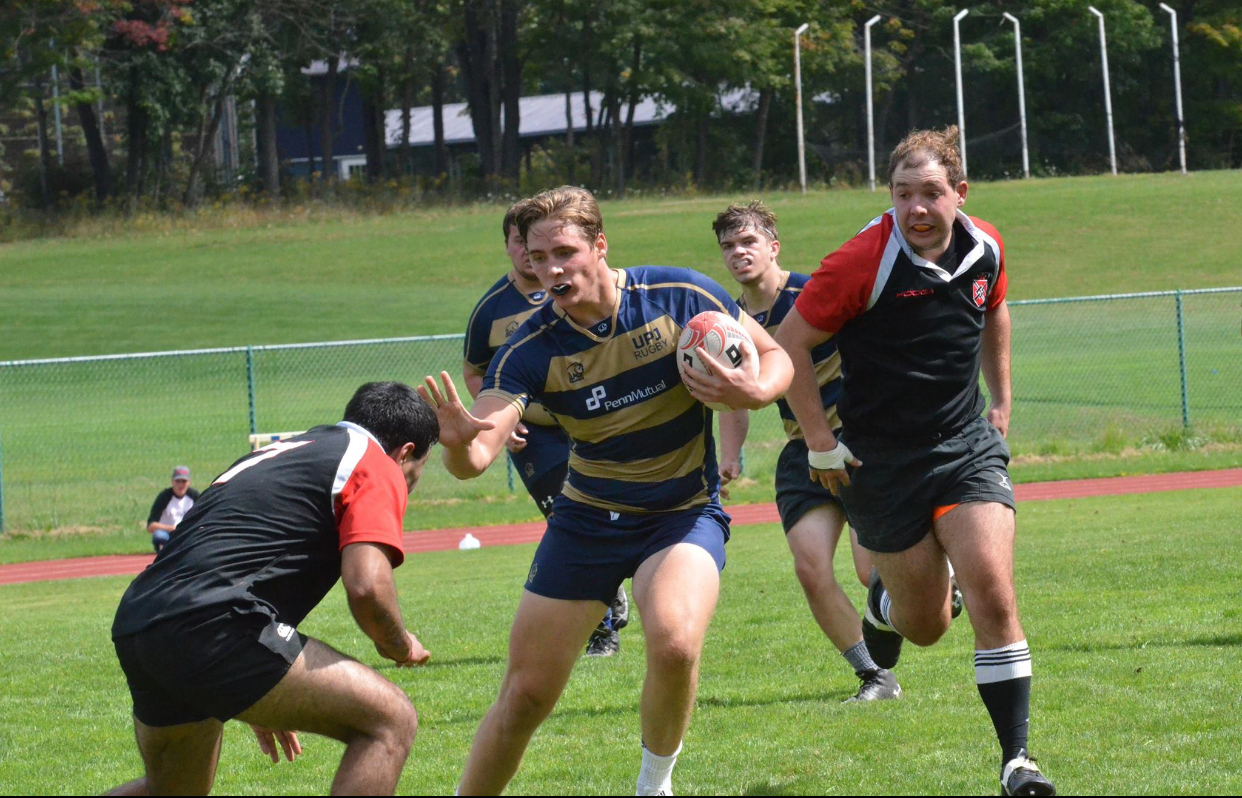 Senior center Matt Roland stiff arms his way through Washington and Jefferson players to make a run for the FarmApes.

The Pitt-Johnstown men’s rugby club, better known as the FarmApes, defeated Washington and Jefferson College Saturday, 84-0.
Senior fly half Jake Bowser scored three tries and wing Zack Lee and centers Matt Roland and Jared Hoover, all seniors scored two tries each.
Single tries were scored by sophomore wings Jake Stein and Norm Ballard, senior 8-man Owen Small and senior wing Matt Checcetti along with senior prop Forest Tuttle.
Senior fullback Grady Zagorac said the team did well against The Presidents.
“We had a few minor mistakes early in the game, but, once halftime came, we switched a couple of players around and really got things going.
“As a team we did a great job, I’m really proud of our guys for getting such a strong win,” he said.
The FarmApes are without a coach once again this year, but with strong senior leaders like Bowser, Zagorac and Small along with assistance from former players like Josh Horner, they are making do.
“It looks like they’ll have a strong team this year and the younger guys seem to have caught onto the game quick so I’m sure they fit in well,” Horner said while watching the match Saturday.
The FarmApes compete in the Three Rivers Collegiate Rugby Conference in the Silver Division with teams from Gannon University, Clarion University and Saint Francis College.
Along with Theil College, St. Vincent College and Penn State – Altoona and Behrend.
The FarmApes were also victorious Sept. 9 over Alleghany College with a 21-0 win.
Junior scrum half Dom Marini said the new freshman on the team have made a huge impact.
“They’ve picked up the game very quickly and made themselves an asset on and off the field,” he said.
Bowser said freshman Seth “Big Country” Roberts has been a great addition to the team not just with intelligence on the field, but with size as well.
“He is (six feet five inches) and roughly 320 so he adds a lot of strength on the field. It’s great having him,” he said.
The FarmApes are on a bye-week this weekend, but return to the pitch Oct. 7 against Clarion University at the Pitt-Johnstown Sports Field.
The FarmApes are 2-0 in conference play.