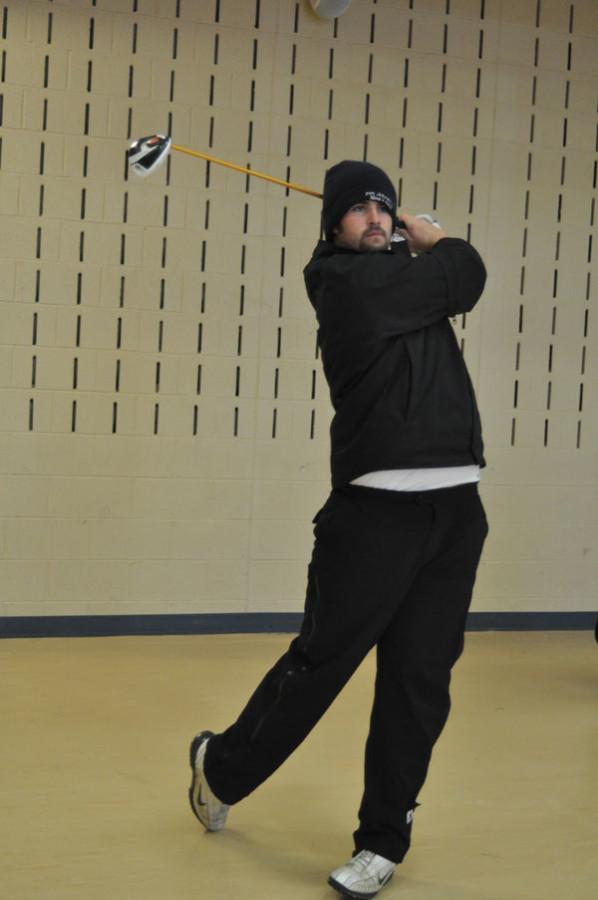 The players are eager for the snow to melt so they can get back out on the course, according to junior Zack McQueen.

McQueen said practicing on their course in these conditions is not possible, but the team has been able to get some practice by using their golf simulator and driving the ball at ranges.

“A couple of us go down to the Sports Center twice a week to hit balls on the simulator,” McQueen said. “It’s a good way to keep our swing throughout the winter.”

Senior Kevin McDonald said putting needed the most work, coming out of the offseason. He said the team steadily improves with each time on the course.

“Our own heads are the only thing getting in our way.”

The men were to travel Monday and Tuesday to the West Virginia Intercollegiate Athletic Conference Southern Regional Tournament at Berry Hills country club in Charleston, but without having actually competed yet this season.

McQueen said it is upsetting that the team was unable to finish a whole tournament, but said he was glad the team had the opportunity to get something out of the weekend.

Individually, McQueen said team have been working on some things they spotted during the practice round.

“We obviously showed some weak points last week, but we all know our game and what we need to do in preparation for each tourney,” McQueen said. “But, I feel good, and I’m making good swings.”

“We were all glad we got to go to a tourney and at least play a practice round to get a feel for where our game is.”

After finishing the practice round Sunday, Senior Kevin McDonald said he is highly confident about the entire team.

“We all look pretty strong heading in to the tournament.”

McDonald said the first tournament’s cancellation does not concern him because this is a conference tournament, and they have many returning starters who already know the course and other competitors.

McDonald said the team wants to do well because it is their last tournament in the West Virginia conference.

“It’d be nice to blow everyone else out of the water.”

After the their conference tournament, the Mountain Cats have only two more competitions this year, their next starting Sunday the West Chester University Invitational at Penn Oaks Golf Club, West Chester, Pa.