Pick-up group yearns to be recognized 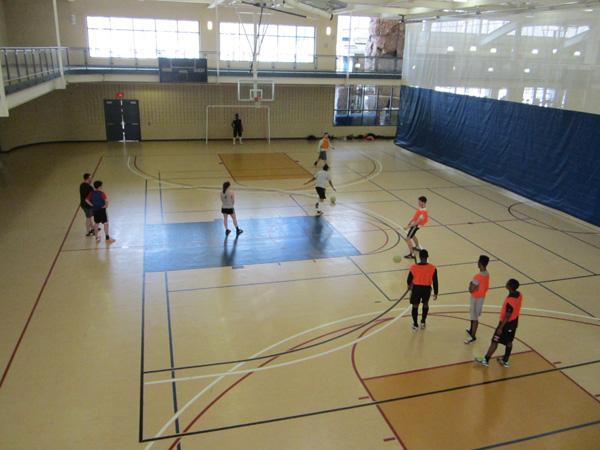 Most weekends there has been a group of students playing soccer on Pitt-Johnstown’s Health and Wellness Center recreational basketball courts.

Over the past two years, frustration grew for the students as they could never reserve the courts for specific time since they are not a club, said Student Government Association member Jacob Dunning.

“We always had to work around everyone else who was there using the gym,” Jacob Dunning said.

Dunning is the Student Government Association campus relations chairman, and it is his job to deal with new club charters.

He also takes part in the weekend soccer activity.

Dunning and the disgruntled students are forming a club sport for soccer.  Some club benefits will include new equipment.

“We could receive funding to use toward new gear– such as goal nets, soccer balls and practice pinnies since all of those items have seen better days,” Dunning said.

“The goal posts we use are barely holding together by a few steel pins, and the pinnies are torn and smell like they have not been washed in years.”

Dunning said their main goal is to draw interest to soccer on campus.

Becoming a club would give the organization more rights and privileges in receiving activity-fee funding and the ability to hold events and tournaments.

They would also be able to reserve tables in the Student Union and reserve rooms for educational and social events to help promote and expand the club.

Geography professor Ola Johansson is to take on the task of being the club’s advisor.

Dunning said groups are rarely denied the opportunity to become a club. He said clubs are usually denied at first due to a revision that needs to be made to the club’s constitution.

The group plays at 1 p.m. every Saturday at 1 p.m. at the Health and Wellness Center and is open for anyone to play.

They also have a Facebook group called UPJ Pick-Up Soccer, at which group members can see who is attending and when.

Junior Marquis Ryan-Walker said games are usually six against six using only one court, but can expand if more people show up.

Ryan-Walker said the group consists of male and female players.

“We play because we love soccer and the competition; it brings us together to learn new things about the sport.”