Athletes to get abbreviated break 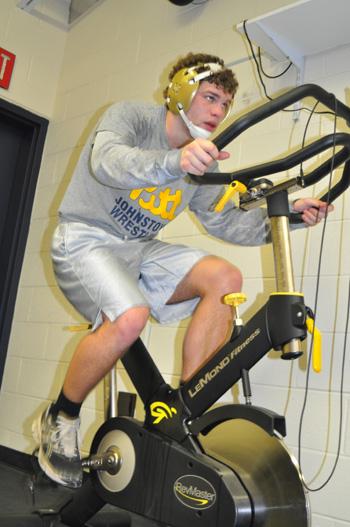 Most Pitt-Johnstown students are preparing for a longer winter break, but there will be a few who will not get to take full advantage of it.

Pitt-Johnstown wrestlers and basketball players will have shortened breaks.

After Dec. 14, most students are to be heading home, but basketball players are to spend an extra night on campus.

Both men and women’s teams are to suit up for home games Dec. 15 against Wheeling (W. Va.) Jesuit University.

After the game, players are to begin a shortened break. The men’s team is to play three games during winter break. Their first game is scheduled for Jan. 3 against Shepard (W. Va.) University.

Rasaun Mosley, a red-shirt freshman, is still expected to attend all practices and games.

Mosley said his family is going to be adjusting to a new holiday routine, but said they understand the situation and are supportive.

Mosley said he plans to participate in a few private workouts at his old high school gym with the aid of his past coaches.

Mosley said it should be sad when he leaves his family, which includes a sister in the Navy who he does not see often.

The women’s team is also scheduled for a Jan. 3 game against Shepard, but is scheduled even earlier during winter break, on Dec. 30, against Lock Haven University.

Pitt-Johnstown’s wrestlers are to spend part of the break competing at a Dec. 28 tournament, the Wilkes Open in Wilkes-Barre.

Assistant Wrestling Coach Shane Valko said the team is to return to campus two days before the tournament to prepare for the competition.

Valko said wrestlers should get approximately a total of 10 days before they return to the mat room.

Valko said the Wilkes-Barre tournament has been competitive in the past, and that the team did well last year.

“It breaks up the holiday, so our guys don’t get too heavy,” Valko said. “I think we are going to do very well at Wilkes.”

After Wilkes Open, the team is scheduled to wrestle Jan. 5 against Millersville (Pa.) University.

Valko said that, aside from an occasional weight gain, he is not worried about wrestlers going home for break.

Aside from keeping their weight down, Valko said he and Head Coach Pat Pecora expect the wrestlers to continue workouts every day during break.

“Usually they are good at maintaining their weight,” Valko said. “They go to high school practices and clubs while they are off.”

Sophomore Travis McKillop said he and his family are accustomed to shortened breaks with athletic demands.

“It is nothing new,” McKillop said. “I’ve been doing this all my life, and you have to put the time in the practice room to get better.”

Through years of experience, McKillop said his parents understand the demands collegiate level athletics, even if it means missing family time.

“They are really understanding of how I have to train,” McKillop said. “Both of my parents were competitors in college as well, so they know what it takes to become the best.”