Some fume with the freeze 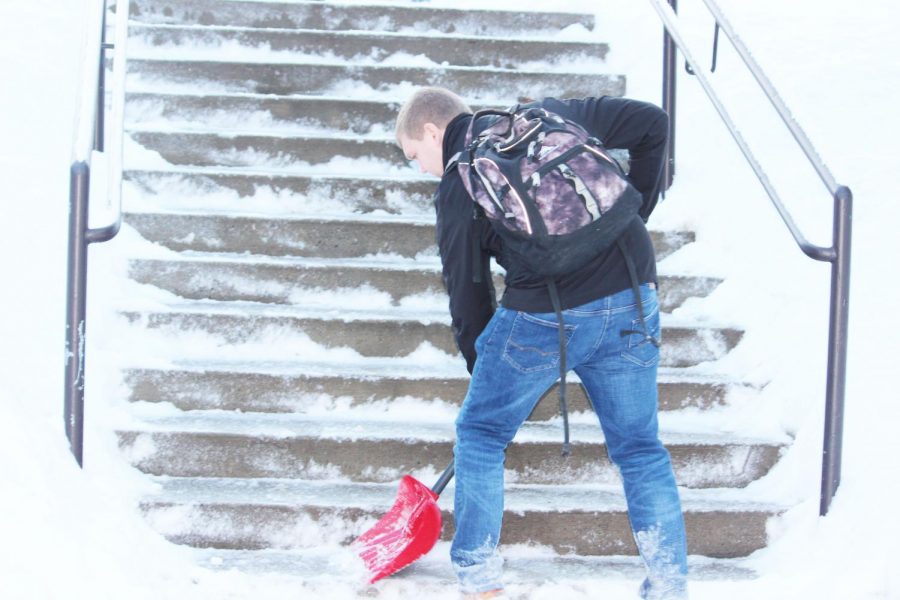 With a polar vortex hitting the Midwest and East last Wednesday, people in many places were taking precautions for the extreme weather.  Pitt-Johnstown students, faculty and staff were no exception.

An online petition to cancel classes Jan. 30 spread quickly among students and by the end of last Tuesday evening, over 2,500 people had signed the petition.

“The idea of the petition came from another student who saw that Slippery Rock University did the same exact thing. She decided that it would be best if I created the petition due to my position on student government,” Shepard said.

The petition wording does not address anyone in particular but apparently was a petition to Pitt-Johnstown President Jem Spectar, who decides whether to close campus for inclement weather.

According to Shepard, there is no way to verify that the signers were part of the Pitt-Johnstown community.  Apparently, students at other colleges and parents were among petition signers.

Although she said she doesn’t have any proof that petitions work, Shepard said that they bring attention to a need or concern.

“Normally, we have paper petitions that go around, but in the interest of time, I decided to use a credible online petition site to spread the word around faster.”

Spectar made the decision for campus to remain open Jan. 30, despite having what could be over 90 percent of the student population sign the petition.

Although he made the decision not to cancel the bulk of classes last Wednesday, university administrators had sent out emails to students to take precautions for the extreme weather.

Housing and Dining and Services Director Bob Knipple sent an email to all students warning them about the single-digit temperatures and below-zero wind chills, which can result in frostbite within minutes of exposure.

Moreover, free cocoa and coffee were provided in the Krebs Hall lobby, the Engineering and Science Building and the Student Union’s second floor last Wednesday, an email said, courtesy of Spectar’s office.

Freshmen Rhoda Ogbo and Jaqueline Wisinski, along with Junior Irene Ogbo, all said they signed the petition to cancel classes last Wednesday.

Rhoda Ogbo and Wisinski both said they were disappointed when classes weren’t canceled.

Irene Ogbo said that although she wasn’t disappointed, she felt that something more should have been done.

“I felt like they should have honored (the petition) because (so many people) signed it.

“And, since main campus was closed, we should be closed as well.

“I heard that the majority of our students are commuters; school should have closed for their safety,” she said.

“It’s good that nothing bad happened, but they should have closed just for precaution,” Irene Ogbo said.

This is not the first time that students were disappointed in administrators this year.

“I have been noticing that, while most sidewalks and staircases have been somewhat maintained, the stairways in front of the (Living/Learning Center) have remained untouched by shovel and salt all year.

“I have fallen at least three times in the past few weeks because the snow on the stairs gets packed down to the point that it ends up just being an icy slope.”

Stewart said he fell Jan. 21, and bought a shovel and take care of the snow himself, for the safety of himself and other students.

“Beneath the snow was about three-quarters of an inch of black ice. I managed to get three flights of stairs at least mostly cleared of the snow and ice, but there are more to be done and I just don’t have the energy or time to keep doing it.

“During the several hours I spent shoveling (that day), two maintenance vehicles passed by me, and one of the crew members even waved to me, but no one stopped to help.”

“To top everything off, right as I got back to my room after having a minor asthma attack, I got an email from the university saying that, ‘all walkways and staircases have been shoveled and salted,’” he said.

Stewart said all he understands that the maintenance staff work hard to make things safe for students, but he hopes that people are aware of the issue and take action in the future.

“I just want people to know that this happened in hopes that something is done about it in the future. I would really hate to see someone get injured because of carelessness such as this.” Stewart said.