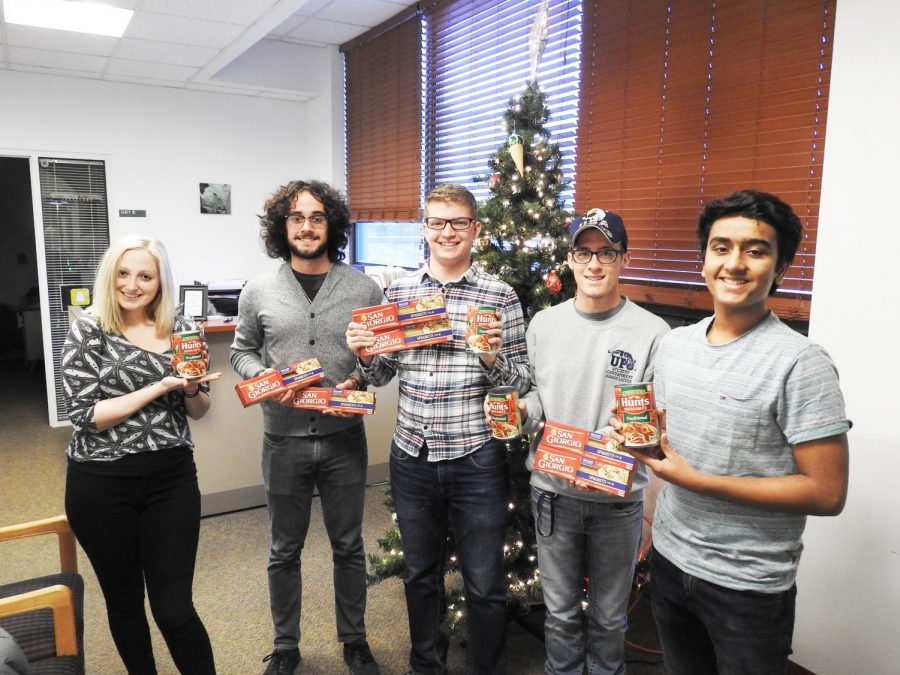 According to Catholic Campus Minister LaDonna McCrary, Family Kitchen volunteers contacted her hoping ministry members would be able to assist with food donations.

“Every Christmas, Family Kitchen prepares grocery bags with different food items and delivers them to families in need,” McCrary said.

“Family Kitchen is made up of volunteers and relies on donations mainly from local churches and the community.”

However, this year some churches could not make their usual donations.

“One church that usually donates spaghetti and spaghetti sauce could not participate this year, so Family Kitchen contacted me asking if we could help them,” McCrary said.

“I went to (student government) and asked if they would be able to help, too.”

A total of 150 of each food item is needed, and, in order to help with donations, Student Experience Chairman Devin Seiger came up with the idea for Food For Fines, an event where students with parking tickets can bring boxes of spaghetti or jars of sauce, and, in exchange, have their parking fines reduced.

Seiger said he got the idea for Food For Fines after seeing other colleges do something similar, and he thought it would be a great way to get students involved.

“It’s good for us to do,” Seiger said, “Not only will students be paying off their parking tickets, but they will be helping families in need in the process.”

“Students can donate by bringing their food items to room G-61 in the Student Union from Dec. 3 until Dec. 7,” Seiger said. “Students who don’t have parking tickets are more than welcome to donate food items if they want to.”

According to Seiger, students who donate food items will receive a voucher that can be taken to the Student Affairs office in the Student Union.

Students can donate three boxes of spaghetti or two 24-ounce jars of sauce for a $5 voucher.

They can also donate a 64-ounce jar and one box of spaghetti for a $10 voucher.

Students can donate multiple items at once to pay off some or all of their fines.

Student Affairs Vice President Chris Stumpf said he is to keep track of which students turn in a voucher, and campus police is then to reduce parking fines.

“I think this is a good idea, helping others is never a bad thing,” Stumpf said.

“Reducing fines is also an incentive for students to help others.”

Only students who have a current Pitt-Johnstown parking pass will be eligible for fine reductions.

Students can still donate items after Dec. 7.  McCrary said that Catholic Campus Ministry members, along with student government members, will be delivering the donated items Dec. 13 to the Family Kitchen in downtown Johnstown, and students are more than welcome to donate food items until Dec. 12 by taking them to Whalley Memorial Chapel.