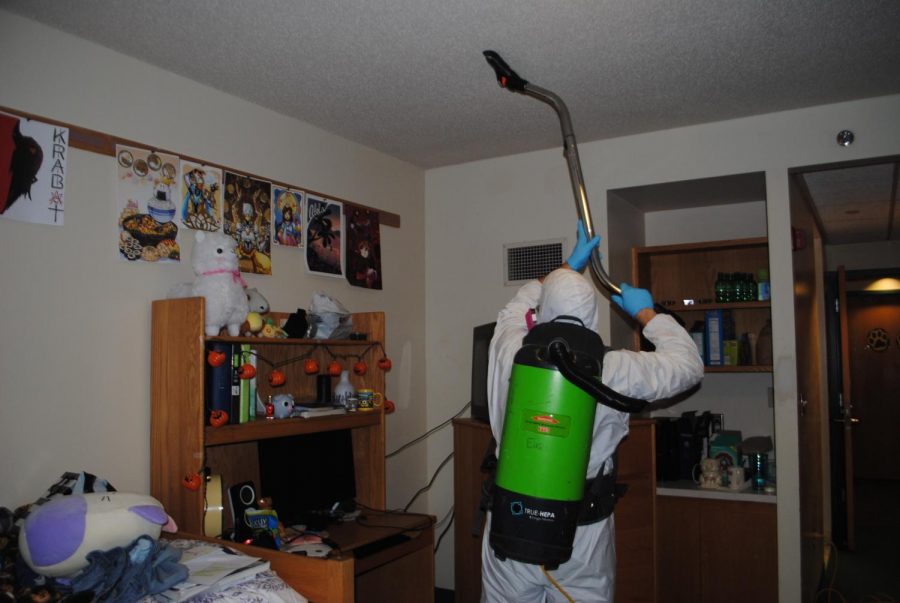 Some Living/Learning Center residents confronted mold when they moved back in at the start of the semester.

According to Dining and Housing Services Director Bob Knipple, 52 mold reports were received.

“Some were just a splotch on the wall, (while in other rooms) the mold had gone from the wall, to the side of the dresser, to the carpet,” Knipple said.

Stumpf said the Living/Learning Center was used over the summer for conferences.

“It was cleaned numerous times and there was no mold found (after the conferences),” he said.

Knipple said the mold started growing because there was an issue in the heating ventilation and air conditioning system.

“There’s a device in the (system) that, when the air conditioning is on, it dehumidifies the air and takes the moisture out. That was broken, and the air coming out was more moist than it should have been,” he said.

Knipple said the issue with the system was fixed by an outside vendor, FIT Optimized Solutions, whose employees have a branch in Winber, Sept. 7.

Stumpf also said since it was so hot and humid, the mold started to grow.

“At the end of the summer, whenever the Residence Life staff did their checks, they found some mold in some rooms and it was cleaned,” he said.

Stumpf said the mold was cleaned, but more was discovered after students moved in and that was also cleaned.

He said due to the number of student complaints, administrators decided to hire a company to clean the building.

According to Knipple, Servpro Restoration Services, whose headquarters are in Gallatin, Tennessee, employees cleaned the building.

One student who had mold growing in his room was junior Andrew Frankeny.

“It was mostly in the bathroom and sink area,” he said.

Frankeny also said he doesn’t think Servpro employees knew what they were doing.

“Like yeah, just leave this giant machine in here, it may or may not do something,” he said.

Knipple said students who were uncomfortable in rooms with mold were given the option to move into emergency housing.

Knipple said there were about six students relocated.

“Every room is being cleaned. The first floor was the worst, second floor had a few instances and the third floor (had) one small instance,” Stumpf said.

He said the original plan was to have dehumidifiers in rooms overnight and move them into a different room during the next day.

“With the monsoon we’ve had over the last three days, and how wet everything is, they’re leaving them in there longer to take care of it,” Stumpf said.

Stumpf said the mold issue is the type that grows during damp periods.

“There’s nothing toxic or black mold about it, it’s gross mold,” Stumpf said.

Knipple said that there was no immediate danger to students at any time.

He said the air quality report confirmed that the air in the building was safe.

“If we thought there was (immediate danger), we would have evacuated the building,” Knipple said.

Stumpf said administrators get that it’s bothersome, but they want it to get professionally cleaned.

“We want to get it done so we don’t have to go back. We don’t want to keep fighting these pop-up mold things for the rest of the semester,” Stumpf said.

Although, Frankeny said he thinks the mold will come back.

“I can still feel the humidity in the building and it makes me uneasy,” he said.

Knipple also said while the building was being cleaned, students were not allowed to be in their room for about 15 minutes.

“They had to be out for the ‘fogging.’ (Servpro employees) applied something to the walls and carpet that will prevent (the mold) from coming back,” he said.

Knipple said that the all the substances used in the cleaning where green and nontoxic.