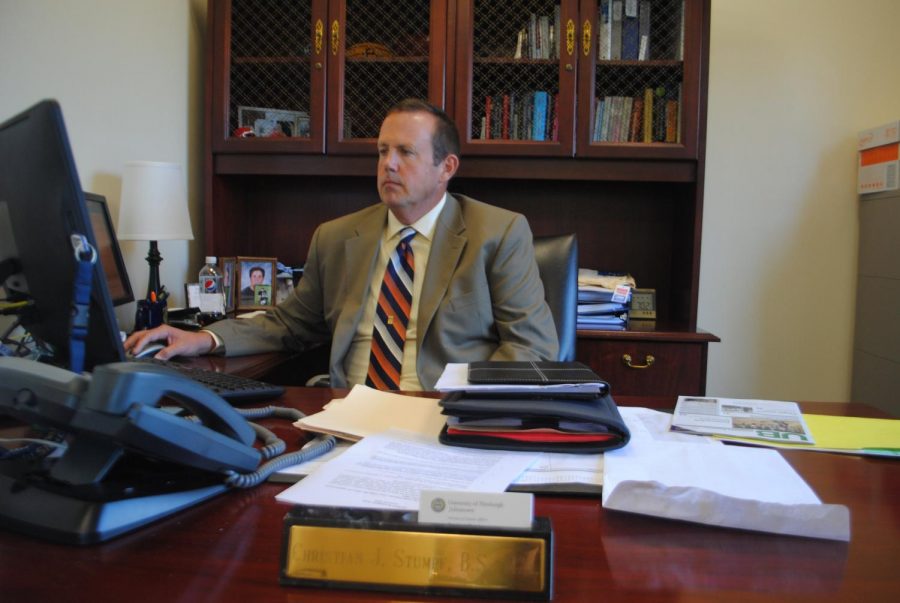 Some familiar people will fill different roles at Pitt-Johnstown this fall following a summer of administrative changes.

Christian Stumpf is to fill the position of interim Student Affairs vice president, although he has never worked in student affairs in a number of administrator positions over more than a decade.

“My master’s is in student affairs, but my background is in college administration,” he said.

Stumpf, who has been working at Pitt-Johnstown since 1996, has worked in conference services, auxiliary services and, most recently, he has served as campus registrar.

Stumpf said he is most excited to work with students.

“(Students) are why the university exists.

“I enjoy watching them grow and become adults and see them develop skills to achieve in life,” Stumpf said.

However, he said he thinks the most difficult part will be dealing with students who make bad choices.

“Student affairs is not to punish, but make a safe community,” Stumpf said.

“We have to look at one student’s actions versus the overall well being to the student body.”

Stumpf said, since he’s been at Pitt-Johnstown since 1990, he knows the campus inside out.

Lisa Hunter, who was the assistant registrar, became the registrar after Stumpf’s transition into student affairs.

Stumpf said he thinks Hunter will succeed in the role because she taught him how to use People Soft and other systems.

“She has all the tools she needs to succeed. She’s going to be fantastic,” Stumpf said.

Hunter and Barbin did not respond to interview requests.

In a statement, Pitt-Johnstown President Jem Spectar said Barbin is to be responsible for managing the Development and Alumni Relations offices.

As interim academic affairs assistant vice president, Kilpatrick said he will have less time in the classroom.

“I normally have four (classes) per term, but now I have two (classes). I’m still in the classroom a lot, about seven (hours) this semester instead of around 15 (hours).

“It’s strange, (and I’m) still getting used to it,” Kilpatrick said.

However, Kilpatrick said one of the things that appealed to him about the position is that he would still be able to teach.

Kilpatrick said he misses teaching first-year students, Kilpatrick said the way he interacts with them now is fun and a different way of interacting with students outside the classroom.

Kilpatrick said he thinks the most difficult part of the job is going to be delivering bad news, while still being supportive to students, like telling them they may not graduate.

Kilpatrick said he wants to make sure the policies and procedures work to keep students progressing toward their goal.

“It’s what the office is about, to help students graduate,” Kilpatrick said.