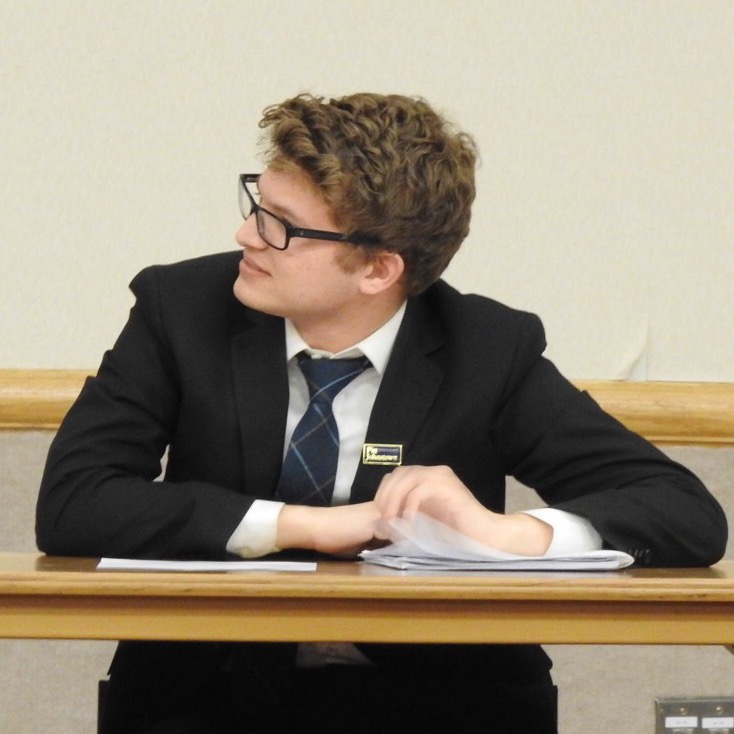 Gretchen Shepard and Sam Miller (above) were the only student senators to submit a petition to run for student vice president and president.

The student senator is to be the next student government president after running unopposed this time. He is to be sworn into the office April 3.

Miller said he ran again in hopes of turning his ideas into reality at Pitt-Johnstown.

He said his vision isn’t something he has seen a student government president achieve.

He said his idea is one in which students look to student senators as people to whom they can voice concerns, for senators to have a closer relationship with administrators and for students to regain faith in government members’ effectiveness in solving problems.

“I think students forget we are the prime avenue to go to for things they think are wrong with the school,” Miller said.

Miller said his No. 1 goal as president is to make student senators more accessible to students by publicizing meeting times, and what senators accomplish at meetings.

His vice president, Recreation and Publicity Committee Chair Gretchen Shepard, said, if she could only accomplish one thing, it would be to increase student involvement.

“I know the hard work it takes to plan events, and I want to see the students involved, engaged and enjoying themselves,” Shepard said.

Miller said he chose her because of her ambition.

“I’ve seen her work ethic and she goes the extra mile, and she is able to operate on her own and doesn’t need someone to always direct her,” Miller said.

Shepard said she’d be Miller’s vice president because she said she thinks Miller is passionate about Pitt-Johnstown and interested in the well-being of students.

She said she considered running for president at one point.

“But, after talking with (Miller), I felt our partnership would bring better results for our school. It doesn’t matter what title we hold, it matters what we do for our school, the students and the community,” Shepard said.

As president, Miller said, he would like to fix structural problems within student government.

He said he wants to look at different committees’ purpose and give those committee members specific goals to accomplish throughout the year.

“Committee members would no longer have to figure out what to do. Instead, they need to figure out how to achieve a set goal,” Miller said.

Even though Miller was the only one to submit a petition for president, he doesn’t think interest in the position is diminishing.

“I think what happened this year was unique. In previous years, (some) disagreed on how to solve issues and who was best to solve them, while, this year, everyone saw (Shepard) and I as the two to facilitate these solutions,” Miller said.

Shepard said, if there had been an election, she and Miller would have won.

“I believe we are required by the constitution to have an election to prove at least one person voted for those running unopposed,” she said.

Current requirements are that candidates for president must have served at least one year in student government.

Miller said, if anyone could run for president, he thinks a lot more people would run.

“In the past, people have said that it’s important to know how the institutions of student government work,” he said.

However, Miller said he doesn’t agree with that.

“I think if students have faith in (student senators) as a vehicle for change, then those limitations aren’t necessary,” Miller said.

Francowic said in order to run for president and vice president, candidates need 250 signatures. She also said potential candidates must have a 2.5 GPA and not be a president of another club.

Petitions were due Feb. 9.

Miller said the requirements are something he plans to bring up to student senators next year.