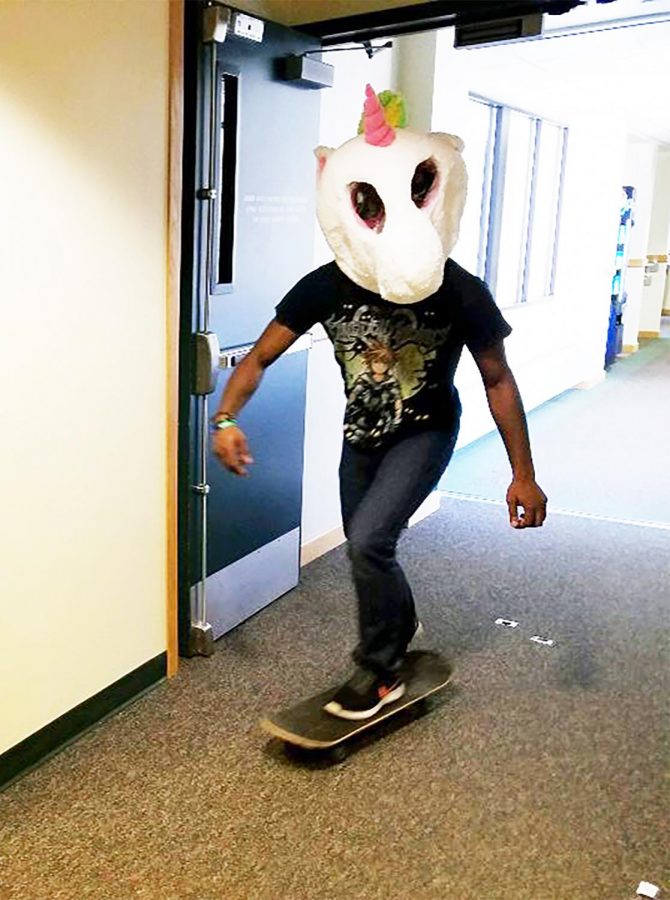 Senior Demar Watson rides a skateboard with a unicorn head he won from the Pumpkin Hunt sponsored by Programming Board members.

Pitt-Johnstown’s weekend life could be in line for a big upgrade.

“I want students to make their weekend plans by first checking in to the opportunities (on campus).

She also said the plan is to invite live performers and have an art project or tournament to allow students to choose from different options.

Student Affairs officials are to research the most popular time when students make their weekend plans so they can maximize marketing efforts.

She said one thing coming is “UPJ’s Got Talent,” a three-round tournament to find out which student has the most talent to earn bragging rights and win a prize.

Tennis club members are also working on a pingpong tournament, according to Hall.

In a flyer presented to student government senators, she said that organization members who a weekend’s events, would be supported by her and Programming Board members.

Hall said, while she expects some students to be skeptical at first, Programming Board members have worked well with her ideas.

Last week, Programming Board members hosted a campus wide pumpkin hunt in which  students had the chance to win prizes for finding pumpkins throughout campus.

“People really enjoyed (the event), and it was a total risk,” she said.

She said the enthusiasm from students last week is the kind of enthusiasm she hopes to build with all campus programs.

This isn’t the first time Hall has brought weekend activities to college campuses.

At her previous two institutions, she has her weekend event ideas and they succeeded.

“Those programs have (lasted). It absolutely works.

She said the working title for her plan is “Mountain Cat Weekends,” but is open to suggestions as Pitt-Johnstown a specific initiate grows.

“I would definitely like to know what students think as this initiative develops its identity.”

Although some students have embraced Hall’s ambitious plan, others are not into it.

“Sometimes I do have a ‘UPJ isn’t used to that’ reaction from a student or two, but I hope they get motivated to try,” Hall said.

“The success, for me, in a program is not necessarily the number of people in the audience, it is that we put together a quality event, and we tried to make it work,” Hall said.

She said that her weekend initiative could help with Pitt-Johnstown retention rates.

Hall said it may take a year or two, but Pitt-Johnstown officials could create the momentum where students are eager to see what activities are happening on the weekend.

This year’s retention rate has not been posted by Pitt officials yet.

She said that ACT Inc. reports that the national average retention rate is 64.6 percent.

“Last year’s retention rate was 82 percent. This represents a nine percent increase over the past nine years and is well above the national average retention rate,” she said.

“Students do not complain to me about a ‘lack of weekend activities.’ Students report to me they are very appreciative of the opportunities for activities and engagement,” she said.

Hall said that there are many factors that impact retention rates at institutions in U.S.

“The biggest factor is creating a sense of belonging and a sense of affinity for the campus.

“If a student is working through the week just to get the heck out of here, we are missing a ton of opportunities to have programs and services that provide those ‘extras’ that develop that affinity,” Hall said.

By having these events and students attending the events, it allows students to see Pitt-Johnstown differently and make this place home, she said.