Almost half goes to only 3 groups

Student government members approved a 2017-2018 academic year budget for clubs and organizations at a March 28 meeting. 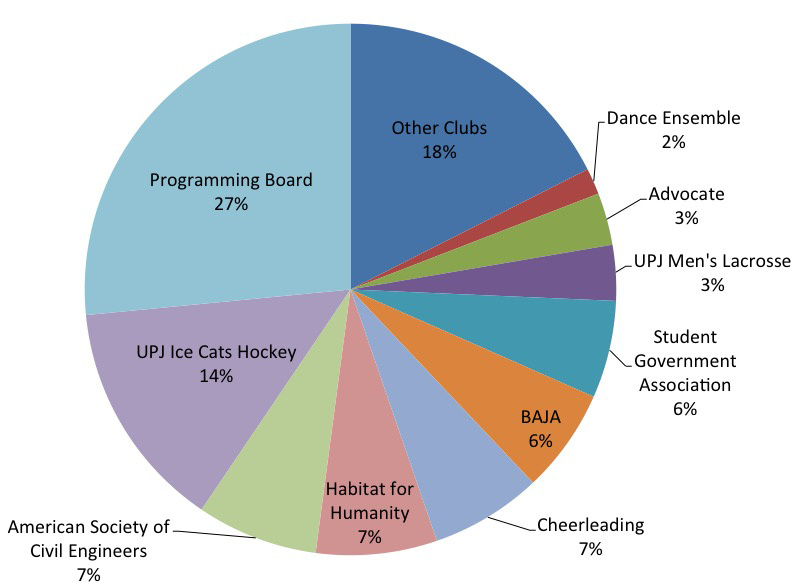 Treasurer Joe Evanko said that was not feasible.

“(Allocations committee members) denied (Nye and Jones) because that just isn’t feasible with the amount of money we have to allocate to all clubs,” Evanko said.

Catholic Campus Ministry requested $18,000 for next year. The organization received $1,896.

Ministry members did not provide proof in time for a funds request.

When Evanko brought amendments to the budgets, one he brought up was the amendment to the ministry’s budget.

For a budget amendment to be approved, two-thirds of student government members must vote in favor of the amendment.

Student government senators passed the members’ amendment, and the club was allocated $1,896.

“Geology Club’s budget was late, and they didn’t give accurate proof,” Evanko said.

The student activity fee — a $90 charge to each student every semester, creates the money to allocate to organizations.

According to Evanko, if a student drops out before a certain point in the semester, all or half of the $90 is refunded.

“We predicted low just to be safe,” Evanko said.

According to Nick, the student government constitution states that a certain percentage of the predicted student activity fee must go to the Programming Board.

She said giving the certain percentage straight to Programming Board members allows them to plan programs based on what is happening, planning events a year in advance.

“With giving (Programing Board members) a certain percentage of the student activity fee, (board) do not have to plan a whole year of events in advance,” Nick said.

Nick also said the Programming Board is the only club the student government constitution requires a certain part of the budget to go to.

“Programing Board serves the whole campus,” she said.

Although club coaches are there for a reason, Evanko said it wasn’t fair to be paying coaches with the students’ money.

The emergency allocation fund allows club members to request funds for something they did not originally included in funding requests.

To keep funds in the emergency allocation pool, 5 percent of the student activity fee needs to be in emergency-allocation funds.

When allocations committee members originally reviewed all of the budgets, the emergency-allocation funds were not big enough.

“We were pretty nice first time around,” Evanko said.

However, committee members then went back through each budget and cut an additional 10 percent to the last line item in each club’s budget, according to Evanko.

“Overall, budgeting went a lot better. We had no mistakes, besides the issue with the constitution.”

“Budgeting has changed a lot since my freshmen year. It’s gotten a lot better, and club (members) are starting to get a hang of (the budgeting process),” Nick said.