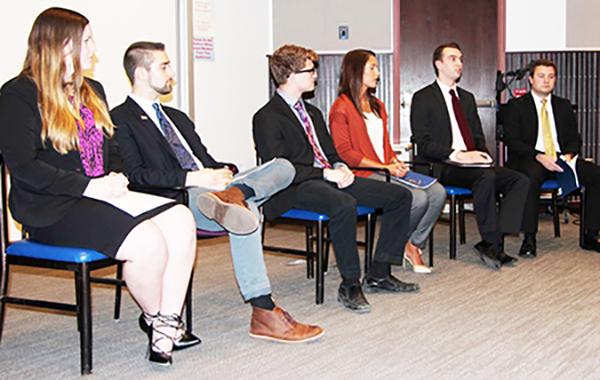 Approximately 35 people attended a presidential debate March 20 in Blackington Hall. The debate was among candidates for student government president and vice president.

The debate began with Adams and Poepoe’s opening statement, in which Adams declared their withdrawal from the race and joined the audience.

In Kopsick’s opening statement, he said he and Shepard would make the student government more trustworthy.

Miller outlined a three-point plan in his statement: to support sports, partner with Greek life and amend the budgeting process.

In his opener, Evanko promised an easy transition between presidents facilitated by the most student government experience.

“The president should be holding our senators to a higher standard,” Evanko said.

Each candidate said they felt their ticket was qualified to lead.

Kopsick emphasized his fraternal leadership through Kappa Delta Rho and the interfraternal council. These positions already connect him to students who bring him ideas, he said.

Miller’s student government experience comes from being parliamentarian and co-chair on an ad hoc committee. He said also he has leadership experience from being a resident assistant, a tour guide and officer in three student organizations.

Evanko said he has three years of association experience and has served as treasurer and Allocations Committee co-chair. He is also a tutor and student instructor, which he said equips him with the public speaking skills needed to run meetings. His relationships with key administrators is also valuable, he said.

For reaching agreements with administrators, Miller emphasized pragmatic compromise. Evanko said senators should continue to raise concerns to administrators after being denied but seek eventual compromise.

To increase senator and executive board involvement in the student government, Evanko proposed assigning more titles to increase accountability. He also mentioned impeachment and requesting resignations, as well as the vice president setting weekly committee agendas.

Miller said a controlled meeting lies with a stern parliamentarian, and he has the experience to appoint an apt one.

The most pressing campus issue, Kopsick said, is food complaints. Since he is close to Sodexo General Manager Kevin Dicey, he said he can bandage communications between students and employees.

Evanko agreed that involvement is the largest issue, and proposed making the association’s existing executive board representatives into Greek and Programming Board liaisons.

Junior attendee Paige Cullinan said she appreciated how each candidate brought up a different point. She agreed that both campus involvement and food were pressing, but she said she personally identified with the food issue because she has a food allergy.

On how to use the log cabin, Miller said to continue its current use but to advertise it more.

“One thing we really focus on is using (student government) as a tool and resource for clubs,” he said.

Kopsick echoed the need for advertisement and suggested a musicians’ practice space or a Greek Life venue.

Sophomore attendee Patrick Troy said this topic interested him most, since he had never considered it.

“It’s something I’ve never really thought about, and I like Sam (Miller)’s emphasis on advertisement,” he said.

Current association president Kyle Maguire asked candidates how they would handle a student petition to censor the media.

The media serves students, Kopsick said, so its members should write what students want to see.

Miller called for compromise before action. Although the petition is representative, he said, the media is also comprised of students. Francowic said her experience as a newspaper editor and senator lets her understand both sides, but that censorship is unconstitutional and always looks bad. However, she said there is always room for compromise.

Evanko agreed that censorship is unacceptable, but that media’s funding should not come from the student activities fee. Seeking another funding source should appease both sides, he said.

In his closing statement, Kopsick said he and Shepard would make the association more active, honest and dependable.

“We will make a more trustworthy (student government),” Kopsick said.

Miller closed by reiterating his ticket’s experience with programming, the newspaper and campus employment. They have an honest and rule-abiding association record, he said. He and his running mate also are willing to admit their flaws and be more forward, he said.

Evanko said campus life should thrive, sports attendance should increase and the association should partner with Greek organizations. He said he and Willis are the most experienced, dependable and reliable candidates.

Compared with last year’s debate, Troy said, this year’s was more interesting due to diverse platforms and more plentiful candidates.

Cullinan said this debate made it harder to choose a candidate because they all had prepared and professional answers. Current president Kyle Maguire has done a wonderful job, she said, and he will be hard to replace by any candidate.

“This is going to be a tough race, but I wish them all the best of luck,” Cullinan said.

The presidential election is to be held March 27 and 28 through campusservices at upj.pitt.edu.