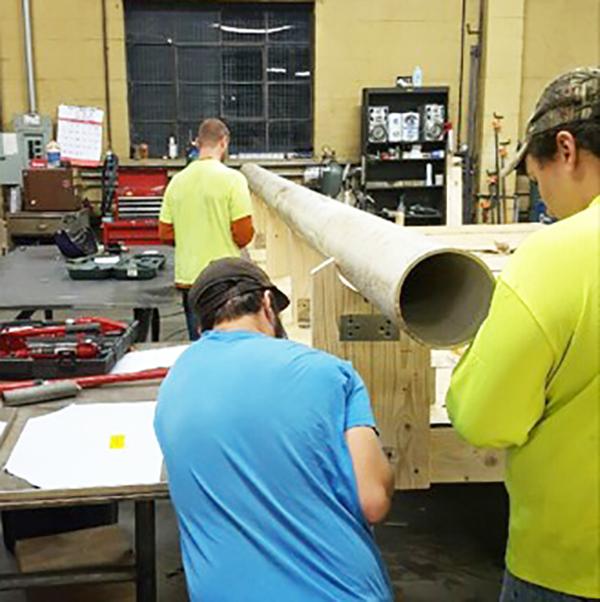 Pitt-Johnstown Ski-and-Board Club members build features for the second annual Rail Jam competition at Craft Manufacturing in Latrobe. The event is to be held Feb. 3.

Throughout last week, construction continued on a course for the second annual Rail Jam competition hosted by Pitt-Johnstown Ski-and-Board Club.

The entry fee is to $10 for the club’s members and $15 for other participants.

The date for the event is Feb. 3; however, it may change, according to Ski-and-Board Club President Francis Bonacci.

The competition is dependent on the weather, according to Bonacci, because if the weather continues in its current trend, the date may have to be pushed back.

Bonacci said he and his friends came up with the idea of the Rail Jam.

“We were talking about ski-and-snowboard competitions, and we decided to pursue our own competition,” Bonacci said.

At the inaugural event last year, there were 42 competitors. This year, however, the club is expecting 60 competitors from around the region to compete.

When planning the competition last year, club members found it was surprisingly easy to acquire funding, according to Bonacci.

Despite the support, Newman was initially skeptical.

He said, when the club first approached the event planning, there was a lot of work to do because the project was so ambitious; but Bonacci said club members moved the project along.

“Due to our enthusiasm, confidence and diligence, the (administrators) were as equally excited for Rail Jam as we were.”

Newman is to be one of the judges, alongside civil engineering professor Brian Houston. Semi-pro skiers and snowboarders from the region are also to be judges.

Newman said he will look forward to seeing participants using the new features.

He said he believed the biggest drop is to be 10 feet and looked forward to the tricks.

In addition to the entry fee, Bonacci said the club also will be accepting donations, and all proceeds from the event are to be donated to St. Jude’s Children’s Research Hospital.

“This is really exciting for all of us on the Rail Jam Committee and the Ski and Board Club. We felt it would be unethical to raise all of this money and not put it to a cause greater than ourselves,” Bonacci said.

Newman said donating the proceeds to St. Jude’s is a great idea.

He added the competition last year was held as a club fundraiser, but, now that they’re well established, it’ll be a fundraiser for a worthy cause.

“It’s a project that’s near to (Ski-and-Board members). They’re aware of the horrible illness that some kids have to deal with.

“I’m sure (the club) will raise a few thousand for St. Jude’s,” Newman said.

Like last year, prizes are to be awarded to the best skier and the best snowboarder.

“We are still talking to our sponsors, so we are unsure exactly what they will be, but last year, the best skier got a pair of Armada skis from Ski Den; and the best snowboarder got to pick a snowboard from Always Board Shop,” Bonacci said.

Bonacci said he hopes for the event to continue on campus because it is a unique student-run event.

He also said he hoped spectators and competitors enjoy the competition.

“I hope (the spectators) enjoy music from our professional DJ, along with a great show from the best freestyle riders in the area. For the riders, I hope they have a great time riding the features that are unlike what they may normally see on a mountain,” Bonacci said.

Freshman Amanda McMonagle said she was excited about the event.

“I’m excited for the event to happen because I enjoy watching ski and snowboard events, and the course looks cool,” McMonagle said.