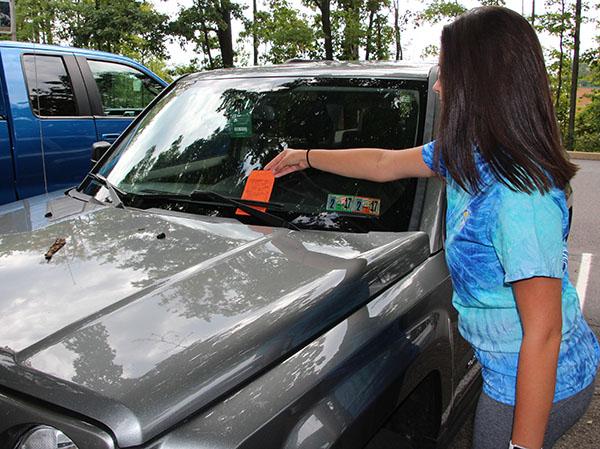 Junior Niki Kusy may pay the hidden costs of parking.

Pitt-Johsntown administrators instituted a new policy for the 2016-2017 academic year that awards free parking permits to faculty and staff members who are military veterans. While military veteran students received free permits in previous years, the campus extended the policy to include all veterans.

John Byrne, an assistant professor of management in the Business Division and a Navy veteran of 10 years, proposed the idea to Pitt-Johnstown President Jem Spectar soon after a Veterans Day luncheon last year. In order to further honor veterans, Byrne said that a simple, easy gesture would be free parking. He later received an email stating his idea had been approved.

The new policy adds to Pitt-Johnstown’s ongoing efforts to recognize veterans, which includes the MountainCat Veterans Program and the annual Veterans Day luncheon for veteran students, faculty, and staff. Due to these efforts, Victory Media has named Pitt-Johnstown a military-friendly school for seven consecutive years.

Raymond Wrabley, Social Sciences Division chair and Business and Enterprise Division interim chair, said he appreciates Pitt-Johnstown’s commitment to recognize every veteran in the campus community at Pitt-Johnstown. Wrabley was a cadet at the Coast Guard Academy for three and a half years.

“I think it’s a positive thing that the president of the, university, I think has been very proactive in establishing the military friendly campus, the MountainCat Veterans Program and prioritizing registration for student veterans,” he said, “and I think it’s a benefit of service that they get that is worthwhile.”

Michael Stoneham, Humanities Division chair, traveled overseas numerous times in his 30 years of service in the Army. Stoneham said that while he appreciates the money saved on parking, the act of recognizing veterans itself is most important.

“I appreciate the recognition for certain of our student population and faculty who have served the nation in some capacity,” he said.

However, the policy not only includes professors and administrators; it also applies to veteran cafeteria workers, janitors, and other staff members.

One such beneficiary is Willie Myers, the ID Center manager and a former Chief Petty Officer in the U.S. Coast Guard.

In his eight-and-a-half years of service, Myers said he performed duties such as inspecting foreign cargo vessels and working on a search-and-rescue team.

“This token of gratitude offered to all veterans makes one feel appreciated for their time spent in service to the United States,” Myers said. “The fee waiver carries more significance than simply monetary value, but more so an act of respect for which I say, ‘thank you.’”