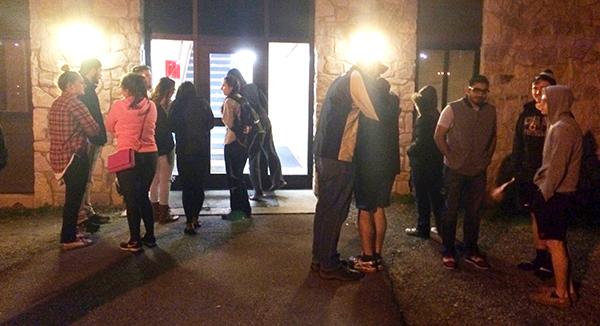 Senior Gabi Maylock was sitting last month in her Summit Townhouse kitchen, when, out of the corner of her eye, she saw a six-inch flame rising from her stovetop.

“My roommate grabbed the fire extinguisher in our kitchen, but my natural instinct was to put the fire out with a bowl full of water,” she said.

Once the fire was out, she and her roommates realized food crumbs that had gathered at the burner’s base were what caught fire.

Maylock said the fire lasted for about 15 seconds and there was a lingering smoke, causing her to turn on a stove fan.

“We were surprised our fire alarm did not go off,” she said.

Smoke going undetected by a fire alarm on campus is a bit concerning, Maylock said.

“It didn’t matter in this particular situation as much because (the flame) was manageable to handle on my own, (my roommates and I) saw it happen,” she said.

“If we were not in the room, the fire would have grown without us noticing.”

Another problem with campus fire alarms aren’t their ineffectiveness, but their sensitivity.

Sophomore Mikala May was straightening her hair by her Hawthorn Lodge sink. When minutes into the straightening process, the fire alarm went off in her room.

It wasn’t until campus police officers turned off the alarm and notified May that it was her room’s alarm that was triggered.

“My hair was dry, so it wasn’t like there was (any steam coming from my straightener),” May said.

“It was hardly smoking at all. My sink is around 6 feet away from my fire alarm, far enough away that it shouldn’t have sensed that little bit of smoke.”

May said she likes that some fire alarms are sensitive, but they could be placed in rooms more efficiently.

“It is a good thing that alarms obviously work well, but it is a waste of time for the campus police to respond to every alarm set off by a girl straightening her hair,” she said.

“Maybe it needs to be placed away from (areas in rooms such as sinks) where people (ready themselves for the day).”

Facilities management director Andrew Walbeck said that fire-protection equipment is tested when school is out of session and done under National Fire Protection Association recommendations.

There are numerous categories and timeframes for each type of equipment such as fire/smoke alarms, sprinklers and hydrants among others.

“Just this summer, we had a comprehensive service package completed, which addressed every piece of equipment on campus,” he said.

The smoke detectors on campus are photoelectric, Walbeck said.

This means they are generally more responsive to fires that begin with a long period of smoldering, according to nfpa.org.

This is comparable with  ionization alarms that are more responsive to flaming fires.

“If hair straighteners and aerosol cans are setting the alarms off, it’s because these items are creating enough opacity to trip the sensor in the detector,” Walbeck said.

“We prefer this sensitivity because it helps ensure fire-protection safety throughout campus.”

Walbeck added that if flames aren’t detected by alarms, it is because there is not enough smoldered smoke to be triggered.

“If burning food hasn’t set the alarm off, it’s simply because the smoke hasn’t reached the detector yet,” he said.

“Because we test our detector heads to National Fire Protection Association standards, I can assure you that, once the smoke reaches the detector, it will trip an alarm.”