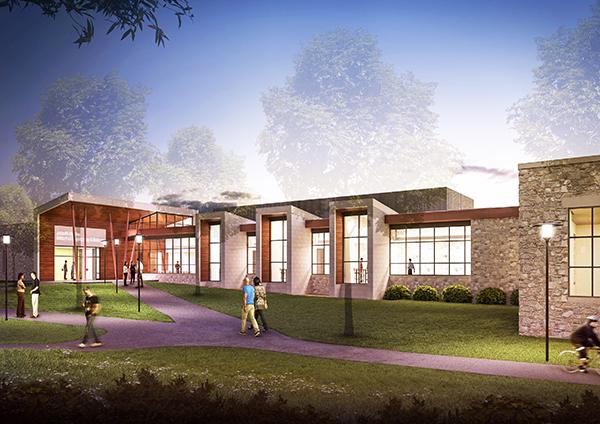 The Engineering and Science Building sketch by IKM Inc. Architects of Pittsburgh.

After over  a year since the groundbreaking ceremony, site preparation is to begin work next month on a campus center named for the late U.S. Rep. John P. Murtha.

In addition, two Krebs Hall physics labs, and the Engineering and Science building are to be renovated.

“This is one of the most exciting things we’ve done in a while,” University Finance and Administration Vice President Amy Buxbaum said of the Murtha Center.

The center, named the John P. Murtha Center for Public Service and National Competitiveness, is to be built between the Krebs parking lot and the Pasquerilla Performing Arts Center along Kunk’s Drive.

The center is to have an event room similar to the Cambria Room, a veteran’s lounge and staff offices.

It is also to include a catering kitchen and an exhibit honoring its namesake.

The event room is to host school and community events, Buxbaum said.

The room is to seat around 200 people and be equipped for computer feeds and workshops.

Because of its community relevance, the center’s proposed location was moved next to campus’ other community buildings: the Arts Center and the Conference Center. Formerly, the center was to be built next to Krebs Hall, where a ceremonial groundbreaking took place last fall.

Administrators wanted the center to be close to the Social Science division in Krebs, Buxbaum said, because community events often tie well into those disciplines.

The center was moved for easy public access along Kunk’s, a desire for symmetry among academic buildings, and a concern for Krebs’s utilities being able to handle an addition.

The center’s timeline is dependent upon weather, Buxbaum said. Trees are to be removed before winter, but construction is not to begin until spring.

Renovation is to begin in mid-November on the Engineering and Science Building.

Fall renovations are to cover some classrooms, Buxbaum said.

Major renovations are to occur over the summer, including addressing a noisy air ventilation system and adding windows to faculty offices, Buxbaum said.

The Krebs physics labs are also to be renovated over the summer.

“This is not just a fresh coat of paint,” Buxbaum said. “This is a major renovation.”

Perhaps the most prominent renovation is a connection between the Engineering and Science and Nursing and Health Sciences buildings.

The connection is to run along the existing front of the Engineering and Science building and attach to the Nursing and Health Sciences building’s existing side door, according to designs.

The connection is to have windows and niches for small study groups, Buxbaum said.

Although both students agreed the Engineering and Science Building could use updates, they were concerned about construction interfering with classes.

Students and faculty are to be alerted about construction logistics in early November, Buxbaum said.

The Murtha Center construction is possible because of a $10 million state grant.

As part of the grant agreement, Buxbaum said, the university matched the $10 million.

According to the University Times, Pitt-Oakland contributed $2.7 million, and the John P. Murtha Foundation $250,000.

Since the state grant had to be matched, Buxbaum said, the Murtha Center construction and the Krebs and Engineering and Science renovations were lumped into one $23 million project.

The center is planned to be completed in December 2016, according to the University Times.

The Engineering and Science Building renovations are planned to be finished by next fall, Buxbaum said.