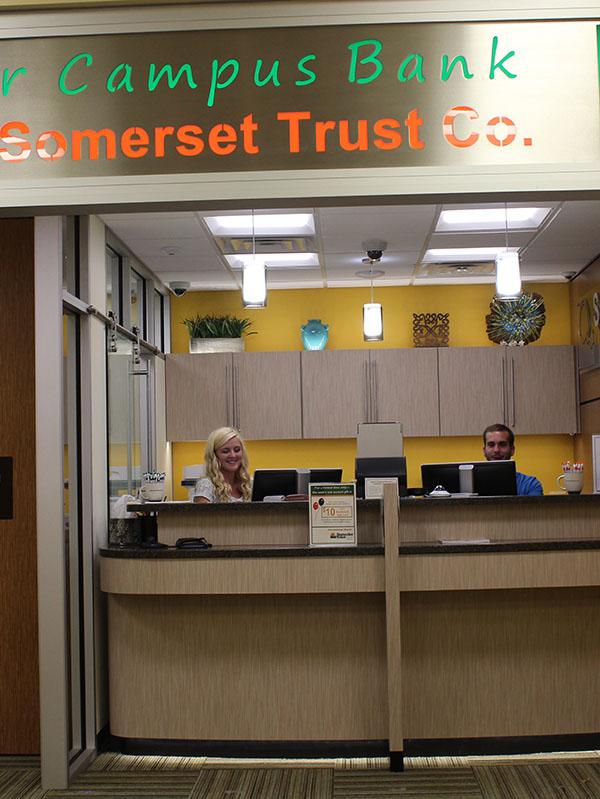 Since Aug. 20, Somerset Trust Co. employees have offered banking services in addition to the ones offered by their two campus automatic teller machines.

Freshman and customer Bohan Qu said he found the bank’s location next to the Student Union’s Tuck Shop to be convenient. Plus his checking account’s lack of monthly fee and minimum balance.

“We’re trying to make this a partnership as much as we can,” Stibich said.

An exact number of customers could not be revealed for security reasons, he said, but he has noticed more students than faculty and staff members.

Qu said he opened an account because his national bank does not have a nearby location. Since he is an international student, he said, he needs a national primary bank, but he would consider using his Somerset Trust account primarily, once it has mobile banking.

The mobile banking phone application is to be released in either December or January, Stibich said.

As part of having a location, Somerset Trust executives both paid for renovations to that part of the Student Union and have a rent arrangement with the campus, Buxbaum said.

Buxbaum said students should use any banking service they choose. Stibich said he and his employees are careful not to aggressively advertise.

“We’re not one of those pushy banks,” he said.

As for Qu, he said he will continue to use his national bank in conjunction with Somerset Trust.