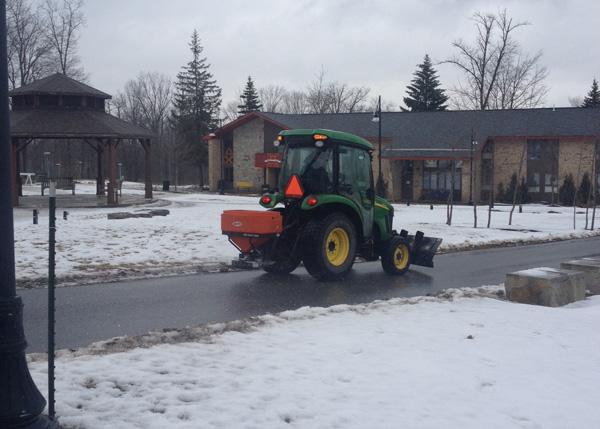 Ice skating may become the easiest way to get around campus nowadays, not just for students, but for university personnel as well.

As snow and ice accompany the Johnstown area winter, many people have to change their daily routine.

The Physical Plant grounds crew are responsible for the snow and ice removal on campus, according to Assistant Physical Plant Director Walter Kalista.

“Our team is constantly monitoring weather forecasts on a daily basis from a variety of outlets,” Kalista said.

Although the weather can change at a moment’s notice, Kalista said the grounds crew does its best to keep up with the often rapid weather changes.

Police Chief Eric Zangaglia said that when it comes to winter, police have to make adjustments.

Something as simple as the officer’s uniforms, to the types of calls they receive.

Recently, police have gotten more calls about people who have fallen on ice, people who can’t get their cars to start and those in car accidents due to road conditions, Zangaglia said.

So far this semester they have already received calls for people who have fallen, Zangaglia said.

A simple task of ticketing parked cars can be more difficult in the winter.

Ticketing becomes more cumbersome because if there is snow on a car’s windshield, the officers either have to use their hands or ice scrapers to remove the snow to see the parking pass, according to Zangaglia

The officers then need to take time to warm up in their vehicle due to low temperatures, which takes up time that normally would not be needed, Zangaglia said.

“All of the officers have been here long enough to know that we still have duties that need to be completed,” Zanagalia said.

Another change to the officer’s day during winter is students who are injured. They try their best to pick up injured students at their residence halls and then transport them to class in the winter, Zangaglia said.

He said a student who is on crutches in the winter is going to have a difficult time getting to class.

Sophomore Shelby Giancola is one of these injured students, but not to the extent of crutches.

She said that she has a moving kneecap and has to wear a brace from time to time.

“I’m nervous to walk on campus because I’m scared I’m going to fall on ice and hurt my knee again,” Giancola said.