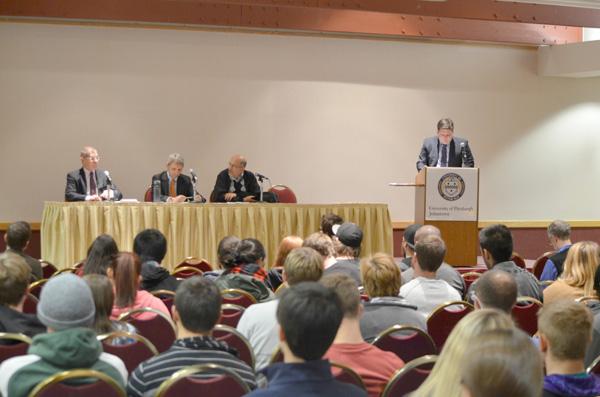 Approximately 200 students attended a panel discussion about the self-proclaimed Islamic State of Iraq and Syria last Wednesday in Heritage Hall.

According to Assistant Academic Affairs Vice President Paul Newman, the majority of those who attended are students, though some faculty members and community members attended as well.

A number of students lined the hallway after the panel’s conclusion,  to sign their names on attendance sheets for attendance credit.

The panelists faced the crowd from a dais, accompanied by Torquato, who stood behind a podium.

The panel lasted an hour and a half, of which the first hour was comprised of basic questions concerning the Islamic militants.

Upon entrance, a piece of paper and an envelope were placed on each chair for students to write questions concerning the militants.

During the final half hour, Torquato introduced student-produced questions into the panel’s discussion.

Topics ranged from background information to opinions relating to the United States and international involvement. Some topics were more complex than others.

Matson said that, under international law, the militant forces are not sanctioned to conduct warfare.

“They are criminals,” he said.

Matson also discussed religious points, referencing the Quran and the Bible and comparing the philosophies and principles of the two religious literatures.

This lead into Matson’s description of fundamentalism, which he described as a modern, but direct and literal, translation of religious writing.

Massasati had a personalized approach to some discussion points. He said he receives firsthand accounts from friends and family residing in Turkey.

Massasati was quick to point out the difference between those following the Islamic religion and those who commit atrocities in its name.

“(These representative of militants) are no more Muslim than Charles Manson is American,” he said.

Massasati said many militants are foreigners to the Syria and Iraq.

“Eighty percent are not Syrian.”

Massasati said he also questions the ability of the international community to solve the problem in Syria.

He said the militant force gained wealth through selling oil to the international community, allowing them to purchase.

Cook discussed the implications of United States involvement, and the involvement of Iraq and Syria’s neighboring countries.

Cook said neighboring countries are not labeling the Jihadist militants as a top priority.

“Everyone over there has their own agenda that doesn’t lineup with our own agenda.”

Cook said if we entered Syria with force, we are obligated to stay because if you leave an unstable state too early, then it will fall apart.

Cook said the United States should be careful when considering future involvement and any further action.

“We have to be careful how we use our American resources, especially American lives,” he said. “Money is one thing, lives are another.”

The panel was a part of a series of fundraising activities held by members of the Wounded Warrior Project chapter on campus.

Junior Gabrielle Morrison said this is the second year that she has worked as a chapter member.

“The goal of Wounded Warriors is to raise money on behalf of the injured and deceased soldiers as well as to promote appreciation for the U.S. armed forces,” Morrison said.

For this semester, chapter members have put together fundraising events called Pie Your RA and Penny Wars. There also is to be a Veterans Day ceremony at 5:30 p.m. Nov. 11.