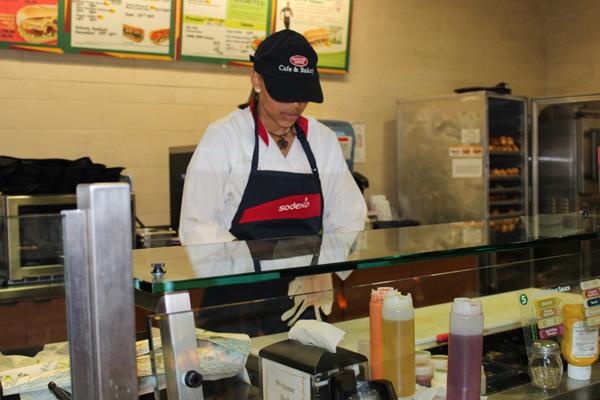 Student Government Association members are considering a petition to get cafeteria hours extended.

Students said extending the hours would be beneficial to student athletes and those who have night classes.

Softball player Amber Maurer said the cafeteria closing is an issue whenever they practice.

“Every time after practice, we have to rush to make it to the cafeteria before they close.”

Maurer is not alone with this problem. The women’s soccer team does not get out of practices until 7 p.m., when the cafeteria closes.

Soccer player Ashley Jackson said she would like the cafeteria to open for breakfast earlier as well.

With games and practices early in the morning, Jackson and her teammates would like to be able to eat before they have to go.

“We have to use our points instead (of using a meal from the meal plan).”

Association members are writing the petition, assuring that it meets their organization’s guidelines.

Proposed hours have the Tuck Shop open on weekends at 4 p.m. compared with 6 p.m. and the cafeteria open until 8 p.m. instead of 7 p.m on weekdays.

Association members are also aiming to get the cafeteria opened as early as 10 a.m. as opposed to the usual 11:30 a.m.

Although the wrestling team’s practices end at 2:30 p.m., wrestlers still want time to shower, do homework and then go to dinner, Molana said.

Three cafeteria workers said they understand why the athletes would want longer hours.

Adjustments would need to be made by Sodexo managers to help with the staffs’ long shifts.

For the time being, Sodexo workers offer a Meal-To-Go program for students who have a job, an internship or hold a student-teaching position during the nonfunctioning hours of the cafeteria.

To request one, students must email [email protected]

In the past, Sodexo workers tried keeping the cafeteria open until 9 p.m.. However, it was not much of a success, Sodexo worker Helen Groves said.

Within the next few weeks, students may be able to support extended hours by signing a petition.