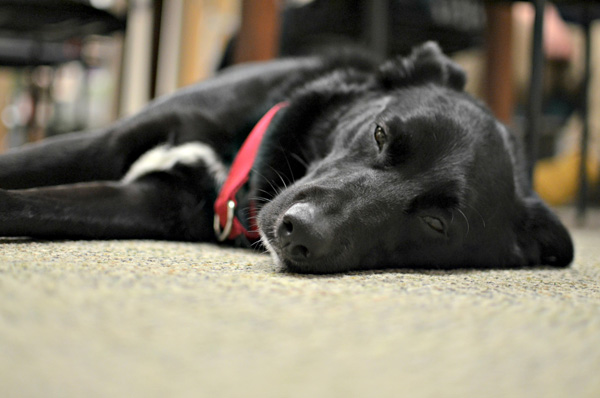 On Sept. 11, communication professor Kristen Majocha brought her dog Mac to her English as a Second Language Workshop.

Majocha said students can teach Mac to sit in their mother language.

“Thus, they learn that body language and vocal tone are important parts of the speaking and learning process,” Majocha said.

Freshman David Kim Changseong from South Korea said it was interesting, since he had never seen dogs in a class before.

Kim said there is a strict school policy in Korea on bringing pets to school.

“We absolutely are not allowed to bring pets to classes in Korea,” he said.

Academic Affairs Assistant Vice President Paul Newman said, as far as he knows, he had not seen a policy against faculty bringing dogs to the university.

“The only place I know that prohibits bringing in pets on campus is the students’ dorms,” he said.

Peggy King, Senior Executive Assistant to the Provost of Pitt-Oakland said there is no policy that specifically addresses pets in the classrooms.

Majocha said it is always surprising to her international students that many dog owners in America have a parent-child like relationship with their pets.

Freshman Du Qianru from China said she was frightened when walking Mac because he was pulling her hard.

“We love dogs but not as much as a family member,” said Du.

Students can learn to speak and listen in this unconventional way because of differences that exist between their backgrounds and the U.S culture.

“I teach culture in this class because language is culturally bound,” said Majocha.

“Interacting with a dog is very valuable as they strive to contextualize the English language,” she said.

“They may see the positive psychological benefits of feeling reasonably comfortable around dogs through it,” she said.

The dogs weekly arrive from the Western Pennsylvania Humane Society.  The visits are part of the College Canine Program.

“There are many nursing homes and hospitals that bring dogs into treatment,” he said.

“I don’t see a problem except for people with allergies.”

“If an instructor wished to bring pets into classrooms, the best thing to do is to talk it over, making sure no one is allergic,” he said.

He said there’s another case for dogs to appear in classes.

“A visually impaired student had to bring a visual dog in my class, and we handled it well.”

“It is reasonable to bring dogs in as long as it is connected to the class, but it doesn’t mean you want to bring a pet to all classes,” said Newman.