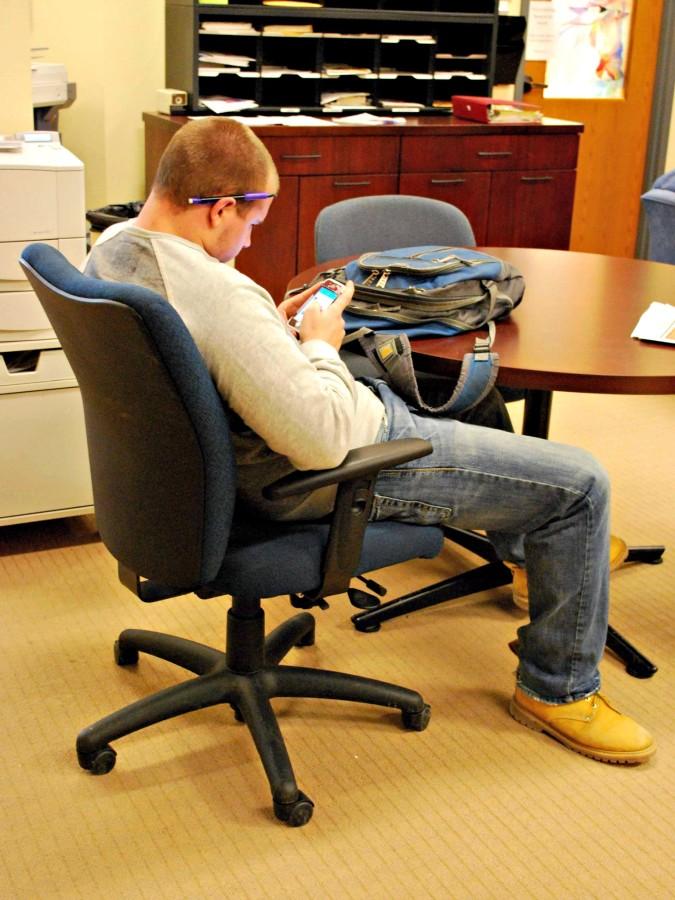 Students working in the Academic Success Center may be pleasantly surprised to see their cell phones work since the installation of a service booster in Owen Library’s basement.

Pitt-Johnstown’s older buildings, like Owen, consist of rock and steel, which are difficult materials for a signal to travel through.

Even though a tower signal may cover an area, phones aren’t always powerful enough to emit a responding signal strong enough to pierce through the rock and steel, Sernell said. This is what the booster helps with.

“It opens up a tunnel for your phone to the tower,” he said.

The tunnel seems to be working. Freshmen Abby Sico and Amanda Coleman said they have noticed improved cell service in the center with the booster.

“It is great for our students not to have to go outside of the building in order to pick up messages,” Kinsinger said.

Sernell said he is glad students have benefited from the booster, but its installation was a happy coincidence because Owen’s basement needed service.

Technicians realized they needed a booster when campus phones malfunctioned last March, Sernell said. Because there was previously no cell service in the basement, technicians were not able to contact outside help to fix the problem while in their offices.

The booster’s primary purpose is to prevent this from happening again, and to ensure people in Owen’s basement would be able to call for help in an emergency, Sernell said.

The only other booster on campus was installed for safety, Sernell said. When campus policemen moved to their current location, technicians installed the first booster so policemen could respond to emergencies on cell phones.

Sernell said he and his coworkers are searching for efficient and reasonable solutions to improve service in larger buildings, such as the Student Union and the Wellness Center.

The issue is complex because no one at the school is completely in control of it like they were with the Wi-Fi initiative, he said.

Differences in phone equipment and service providers makes it hard to find a solution that works for everyone, he said. Technicians continue to work with service providers and local specialists to find solutions.

Sernell said he knows students want better service, as student government senators have said, and that he and his technicians are working to help.

“We are trying. We’re working; we’re doing some analysis. We hear the problem,” he said.

In the meantime, technicians are learning from the success of the boosters, and are trying to bring the same improved service that students enjoy in the success center to the rest of campus.