Defibrillators, training to be added 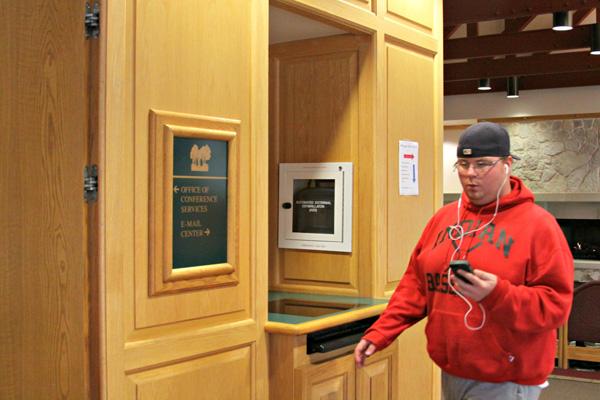 Defibrillators have been on many minds lately. Since Pitt-Johnstown librarian Jim Langan had a heart attack where a defibrillator was needed.

According to Skoranski, Brooks said that a faculty group was to hold a meeting to analyze the situation and see where defibrillators are located on campus and judge their accessibility.

Skoranski said at the following student government meeting, Brooks said that more defibrillators had been ordered and would be made more accessible on campus.

Health and Wellness Services Office staff were contacted about defibrillators, and directed that those questions be asked of Campus Police. Police Chief Eric Zangaglia was unable to answer questions Thursday and, as of Friday, had not responded to an email request for information.

According to Finance and Administration Vice President Amy Buxbaum, there are defibrillators mounted in the police station, the Living/Learning Center, the Pasquerilla Performing Arts Center, the Zamias Aquatic Center and the Wellness Center.

Each building holds one defibrillator with the exception of the Wellness Center, which has two.

In addition, there are two police vehicles equipped with defibrillators, as well as two that are moved to practice and competition sites by athletic trainers.

Sophomore nursing major Andrew Thiry said the school needs to have more defibrillators      around. Thiry said that he doesn’t know where they are.

“Not enough people on campus know how to use them (defibrillators) or what to do in a cardiac arrest situation,” Thiry said.

“I know there is one at the entrance of the LLC because I walk by it every day, but, otherwise I don’t know where any of them are,” Marino said.

He said each building should have at least one defibrillator and that each police car should also be equipped with one.

Buxbaum said that the campus Critical Incident Response Team has started planning for training students, faculty and staff who are interested in defibrillator and CPR usage.

She also said that the Student Nurses Association of Pennsylvania has been working on grant funding to purchase two more defibrillator units for campus.