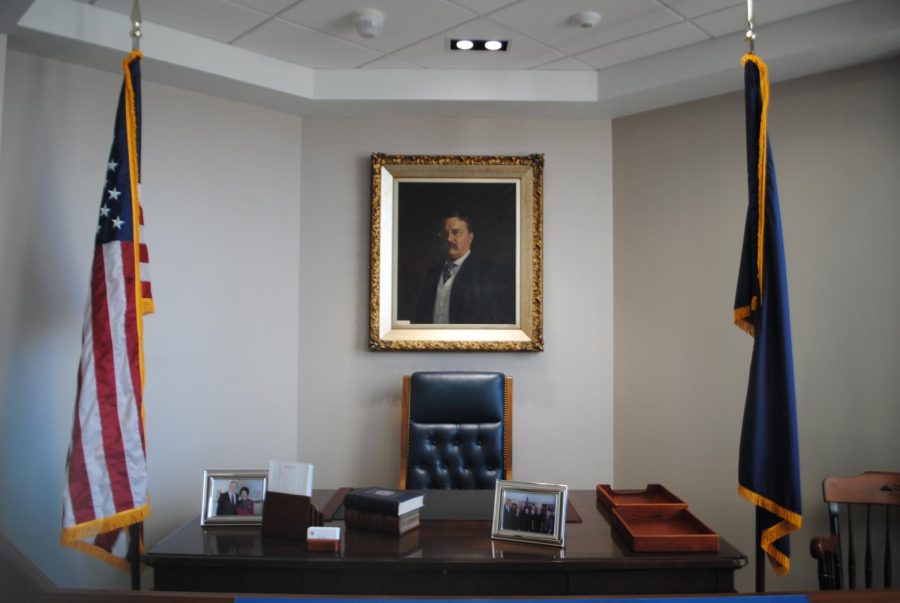 No descriptions accompany many of the artifacts on display at the Murtha Center, including a Teddy Roosevelt portrait hanging above Murtha’s desk.

It has been almost one year since the John P. Murtha Center for Public Works opened, giving individuals an insight into John P. Murtha’s life.

Murtha, who attended both Pitt-Oakland and Pitt-Johnstown for economics before completing his graduate work at Indiana University of Pennsylvania, dedicated his life to serving others through his political and humanitarian work.

The center, situated between Kunk’s Drive and Krebs Hall, was opened to the public last April 6, and has been showcasing Murtha’s life through a series of photographs, artifacts and stories.

IKM Inc. of Pittsburgh Associate and Project Manager Doug Lieb and Project Architect Ben Clements were in charge of the artifacts’ design and placement. They worked with Murtha’s family to help tell his story.

“Our job was to be in on those conversations (with his family) and present his story through his artifacts and the building,” said Lieb.

“We wanted to be accurate and fair and do history justice.”

According to Lieb, the building took about a year to design, and it constantly changed throughout the process due to the stories that were told by Murtha’s family.

The building was also supposed to be in an entirely different location than where it is situated now.

“Originally, the site for the building was supposed to be adjacent to Krebs, almost touching or connected to it,” Lieb said, “but as the project evolved, (Pitt-Johnstown President Jem) Spectar didn’t want the center to be overshadowed by an academic building.”

Clements said the building was moved to a site along Kunk’s Drive, detached by a parking lot from Krebs Hall.

“It’s now located at a highly visible site. It was very important to the university that it stood out.”

Some of the many artifacts on display include Murtha’s military uniform, his desk and a golf putter given to Murtha by former President Bill Clinton.

There are also numerous service ribbons, but those, says Lieb, are replicas, because Mrs. Murtha wanted to pass down the originals to her grandchildren.

There is also a gallery section dedicated to Murtha’s Johnstown legacy.

“Murtha was constantly working and fighting for the people of Johnstown,” Lieb said.

“Often times he would come home and sit down on a bench in the woods in his backyard and just think about things that made a difference to him and how he could make a difference for others.”

Although the center was originally received well by students and associates of Murtha alike, a Pitt-Johnstown history professor said some were not pleased with the museum’s construction and exhibits.

Paul Newman, an early American history professor, said History Department faculty were not consulted nor asked to be a part of the planning for the center.

“It is an absolute embarrassment,” said Newman. “People assumed we (History Department) were part of the process when, really, we weren’t consulted at all.”

Newman says he has many problems with the way the gallery was designed, along with punctuation errors in some descriptions of artifacts, certain artifacts not being labeled and false artifacts being placed.

“There is no sort of protection on some of the display cases, so some artifacts are being deteriorated by the sun,” said Newman.

“Some artifacts don’t have labels, so how do we know they are artifacts, or who the people in certain pictures are? One poster was bought at a gift shop, and is actually based off of a poster from several years before Murtha was even born.”

“I knew Murtha personally, and he always said Teddy Roosevelt was the reason he went into politics,” Newman adds. “Roosevelt is not mentioned once when you read about (Murtha’s) early life.”

An unlabeled painted portrait of Roosevelt is displayed at the center hanging over Murtha’s desk, also displayed, as it had been in Murtha’s office.

Lieb says the center is a perfect way to represent Murtha’s life and continue his legacy.

“It was amazing to see how many hours the people who knew him spent traveling here just to spend time with us and tell us his stories,” Lieb said.

“Their passion is what makes this place a special place.”

Anyone who wishes to visit the John P. Murtha Center for Public Works may during the center’s hours of operation, which run from 8:30 a.m. to 5 p.m Monday-Friday.