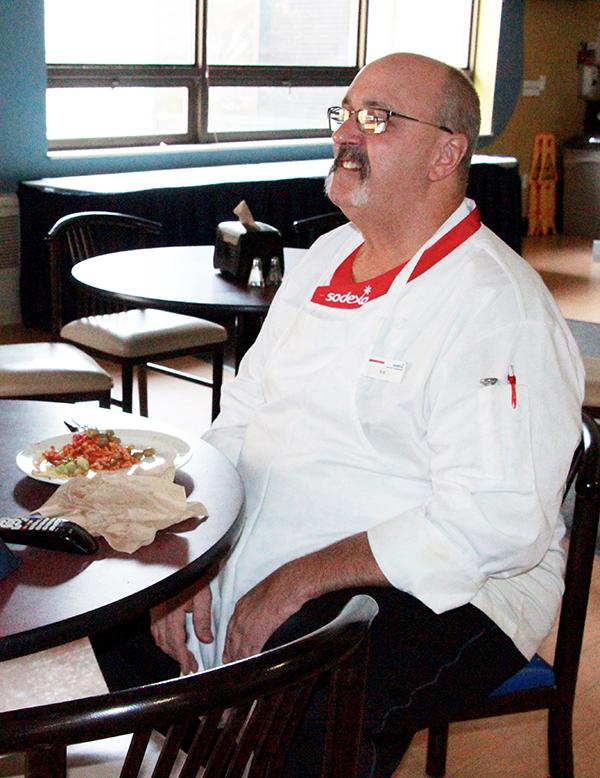 A bench long enough for about two people, hidden in a corner outside of the Living/Learning Center, is the only place Varsity Cafe Sodexo employees are allowed to smoke during their work breaks.

Each employee has a 30-minute lunch break and two other 15-minute breaks during workdays, Sodexo General Manager Kevin Dicey said.

An anonymous employee said she can smoke only at this designated smoking area where she gets rained or snowed on during harsh weather.

All Sodexo employees in this story are anonymous as the topics they discuss might put them at a disadvantage with their jobs.

Student Union Sodexo employees are allowed to smoke on a concrete platform between dumpsters and trolleys, beside the Student Union’s loading dock area.

“No idling. Diesel-powered Vehicles Over Five Tons,” a sign beside the dock area reads.

These designated smoking areas have been defined so that employees do not occupy students’ smoking space, according to Dicey.

Walking down a small slope by a bench outside of the Living/Learning Center, one can see a blue dumpster where two employees said they used to eat.

A few weeks ago, two tables were set up at Sodexo’s office at the Living/Learning Center for the employees to eat, according to one employee.

Their Student Union co-workers seem to have a larger eating space.

He said employees can eat in the cafeterias only when they are not open to students. Otherwise, they need to eat in the designated areas.

Dicey said the employees, however, are not allowed to rest or eat in other Union areas, such as dining areas in front of Brioche Doree.

He said students complained about employees eating in those areas in surveys before he came to Pitt-Johnstown about two years ago, which is why employees are prohibited to eat there.

An employee said the rules don’t get implemented well, and sometimes vary from person to person.

It is unclear whether it is by the university’s rule or the company’s rule that employees are not allowed to take their breaks in these areas.

A Sodexo student employee said Sodexo does not allow employees to enter residence halls on campus by corporate rule.

For example, if an employee’s grandson is a campus resident and invites an employee to his room, that employee may not go, the student employee said.

The student employee said she thought not allowing employees to enter residence halls is ridiculous.

Dicey said there is no reason for any employee to enter a residence hall.

“It’s not just Sodexo. It’s a Pitt-Johnstown policy that, without university permission, staff members are not allowed to go into residence halls.”

A longtime Sodexo employee said a former student had stopped by and invited the employee to her dorm, but she could not go.

“We are not allowed to mingle with students,” she said.

“(Where we go) shouldn’t be anybody’s business once we are (off-duty).”

Dicey said the employees have their union and their managers to talk to when they have issues with company rules.

“I’m concerned with them (Sodexo employees) talking to you (an Advocate staff member).”

One employee said, however, that she felt her concerns were not heard.