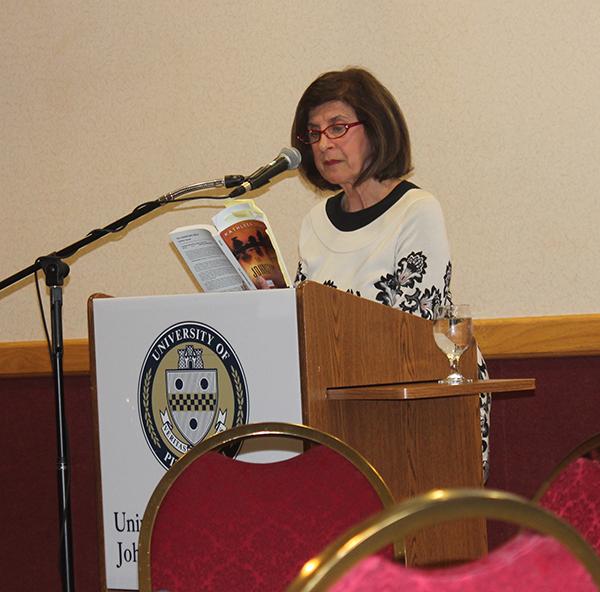 George, speaking from a podium in Heritage Hall, told listeners how she arrived at her 2014 novel “The Johnstown Girls,” which is about two twins in the 1889 Johnstown flood.

She began with two anecdotes describing how her parents could tell she would be a writer.

Living through the 1977 Johnstown flood and the panic of searching for her mother solidified her inspiration, she said.

“There were tractors in trees,” she said, describing the flood’s carnage.

Another reason for the story’s setting was her familiarity with the area, since she is a native.

“When I need a place for criminals to go, I generally send them to Johnstown,” she said.

Johnstown residents have a certain spirit that appeals to her, she said.

“We’re tough,” she said. “We can bounce back from anything and stay nice while we do it.”

George has directed at least nine productions and has written eight novels. Her next challenge is to combine the two and adapt one of her mysteries into a play, she said.

Before George’s speech, students presented 33 papers on topics such as identity, gender and religion. There were also presentations from award winners and ones concerning identity and Marxism.

Presentations were grouped into nine different panels according to subject. Several panels ran concurrently, so people had to decide which to attend.

She wrote the paper in her critical theory class, she said, and reworked it several times for the presentation.

Though this was her first conference, she said she would like to attend another.

She said her favorite presentation was Pitt-Johnstown junior Jacob Williamson-Rea’s analysis of Kurt Vonnegut’s “Slaughterhouse-Five” because Williamson-Rea had access to original manuscripts.

The conference was their first but it was a good-sized conference with which to start, Lang said.

Lang said she wishes she had presented during the conference. She had papers that would have applied to several topics discussed, she said.

Lang said she hopes to present in the future.

Paonessa had a similar topic as her own presentation, “The Generation of an Idealized Identity,” so Ruefle said she was able to connect with the material.

It was her first time presenting, but she would consider getting involved in a conference again, Ruefle said.