Johnstown is only branch banning mace 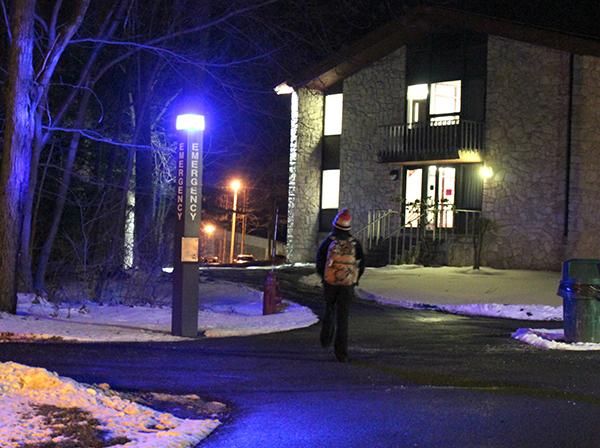 Student Stephanie Bonga walks along a path outside Maple Hall.

Not all Pitt-Johnstown students are aware that a commonly carried defense tool is outlawed by the university’s Student Code of Conduct.

According to the Pitt-Johnstown website, mace is included in the firearms and weapons definition and is prohibited in Pitt-Johnstown housing and on university premises.

Other University of Pittsburgh branch campuses, however, including the Titusville, Greensburg and Bradford campuses, do not list mace in the firearms and weapons definition in online versions of each campus’ Student Code of Conduct. The same is true for Pitt-Oakland.

Senior Kim Bonnett said she was not aware of this rule and disagrees with it.

Bonnett said that she knows at least two girls on campus who carry mace.

She does not carry mace herself and mentioned some alternative precautionary measures. She said she takes to stay safe when walking at night.

“I always try to walk with a group and barely go anywhere by myself,” Bonnett said.

Another student, freshman Elizabeth Reams, uses her keys as a potential form of protection.

“I normally keep my keys in between my fingers, kind of like Wolverine so that I feel safer,” Reams said.

“I do not feel that this campus is an unsafe one, compared to other schools that are in the city and have people that are not students on the grounds of the school. Here, there is little to no outside traffic of people.”

Senior Logan Corle said he was aware of this rule, but doesn’t think it will prevent people from carrying mace.

“I know quite a few females who carry it with them all the time and it should be allowed. Possible alternatives (to mace) would be to carry a knife, walk in groups at night or both,” Corle said.

Knives of any kind, however, are prohibited on campus as well, as stated in the Pitt-Johnstown Student Code of Conduct.

Senior Alayna Tomaselli said she recalls when her safety was at risk and that makes her feel as though students should be permitted to carry mace on campus.

“I think it’s a mild form of protection, as opposed to knives or guns. It would just allow people to feel a little safer when walking at night, especially because of some of the instances that have happened over the past few months, like that man who walked around at 11 p.m. that one Sunday night asking to get into the frats to party,” Tomaselli said.

Junior Alex Scanga said he knows several girls who carry pepper spray and thinks they don’t know that it’s not allowed on campus. Scanga said he thinks that students on this campus, as well as all college campuses, should have the option to carry mace.

“I think (Pitt-Johnstown) should change that policy because people need to feel safe on this campus. This school has many policy issues that need to be changed,” Scanga said.

Though mace is banned, students can carry personal safety alarms which can be attached to a keychain and emit noise in one swift motion.