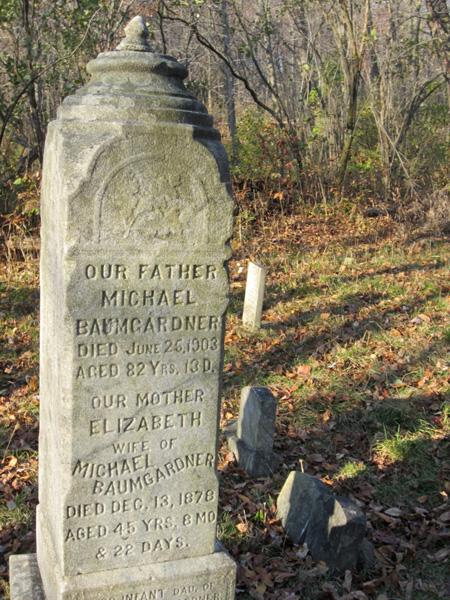 As Halloween approaches, Pitt-Johnstown students are preparing for campus frights and fun.

Delta Chi and Sigma Tau Gamma fraternities are to host Halloween-themed parties. Some residence halls are hosting movie nights with a horror theme, and Office of Health and Wellness is planning a Halloween-themed wellness Wednesday event today in the Student Union.

Although fun frights are to be provided to students, the UPJ campus has paranormal experiences to offer.

Deep in the forest behind the soccer fields is the Baumgardner Cemetery. Michael Baumgardner and his immediate family, along with extended family, are buried there.

The Baumgardner deaths began in the 1870s. Each stone indicates the year of death. The cemetery has a total of 85 marked graves, and 14 are marked with tombstones. Many markers are hidden by brush and leaves.

One of the family members was an infant, born and died on the same day, killing the mother during childbirth.

Pitt-Johnstown senior Abby Atkins said she went to the cemetery in April.

The group experimented with an Ouija board, and claim to have connected with spirits. Atkins said the board piece shook when they spoke with the spirits and indicated the initials of the dead.

Atkins also claims to have seen a tall, black figure resembling a man while at the graveyard. Her and her friends fled quickly after the encounter.

The UPJ soccer fields are said to be haunted by spirits from an Indian burial ground.

Richland Township Resident George Percinsky runs the track next to the soccer fields every night at 11. He claims to hear strange noises from the woods.

“I hear strange bird noises from the woods, like native calls,” he said. “Not like anything normal.”

Percinsky also claims to have seen a strange animal emerge from the woods. The animal resembles a deer that is half tan, and half white. The creature appeared for several nights when the track lights would come on, but he said he has not seen it lately.

Laurel and Oak Halls are said to be haunted by spirits. The patch of woods between the two halls are claimed to be more Indian burial grounds.

“UPJ may have violated the sanctity of the land,” said Laurel Hall Resident Assistant Jake Wolff. “People hear drums outside their windows. I haven’t heard anything, but I can see how it would be freaky.”

Laurel Hall Resident Keedan Liebert said he is positive he has heard the Indian drums.

Wolff also shared a rumor from 1986. A knife was thrown through the halls of Laurel with no explanation. An exorcism took place in the dorms to remove potential spirits.

Laurel Hall residents have claimed to have seen the spirit of a young girl and an old person.

“The basement is the most haunted,” Laurel Resident Mariah Dickert said. “I have woken up seeing shadows before, but I don’t know if it means anything.”

Although Laurel may have native spirits roaming the halls at night, Hemlock Hall takes gold for paranormal activity.

Hemlock Resident Director Carrie Law claims to have continually been locked in her bathroom when she was a Resident Assistant in 2010.

“I kept a hanger in the bathroom to get myself out because it happened so often,” Law said.

“The first week here, I got locked in my bathroom,” said Dundorf. “My room door was locked, so no one could have done it.”

“Before move in, when all of the room doors were open and everything was the same, we would pass a room and a chair would be centered, facing the door,” said Holt.

Holt also said that previous freshmen living in Hemlock claimed to wake up in the middle of the night with scratches on their chest.

Hemlock roommates Claire Martin and Lauren Sirinek have had unexplainable events happen in their dorm room.

“One day, I was sitting on my bed with the window open,” Martin said. “There was no breeze or anything, and the window slammed shut from the inside.”

Hemlock roommates Kayla Stockdale and Christine Vagonis said they believe their room is the source of the hall’s paranormal activity.

“The third week in, we were watching TV in our dorm,” Stockdale said. “As we were sitting there, Christine’s backpack full of books flew off the desk chair.”

No one was near the back pack to cause it to fall.

Neither of the women were in Hemlock at the time.

Suitemate Stevie Langham claims to have heard noises similar to a person jumping on a bed, and running around the room. She also claims the toilet flushed multiple times over the weekend when no one was in the restroom.

Stockdale and Vagonis believe the spirit haunting their room is the spirit of Betsy, the ghost of a young girl named by previous Hemlock residents.

“Usually she does things when we’re sleeping,” said Vagonis.

Stockdale claims that Betsy’s spirit is harmless, but that they have had one threatening experience with their paranormal friend.

“One night, our friend Nick was sitting at my desk,” said Stockdale. “He was making fun of our stories of Betsy and suddenly started having trouble breathing.”

Pitt-Johnstown freshman Nick Malaskovitz left the room to try and catch his breath. When he returned, Malaskovitz had unexplained red marks on his neck.

As Stockdale and Vagonis shared their experiences, a picture frame fell from the girls’ dresser. No one was near the dresser when this happened.