Best shack to get hammer 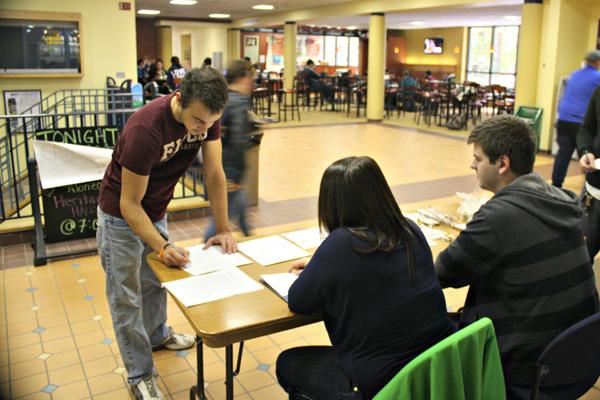 The Pitt-Johnstown campus mall Monday was to be littered with cardboard shacks again this year for the annual Shack-a-Thon.

Organizations were to construct a Third-World inspired village.

After construction, students were to sleep in the shack, giving up the comforts that the countries they are emulating commonly do without.

Habitat for humanity was to hold the event, and drinks and pizza were to be provided for the overnight camp-out.

Shacks were to be judged on creativity, stability and level of educational awareness. Other factors were how well the shack followed guidelines and how well it resembled the structures of the country chosen by the organization.

Judging is to be held Wednesday and demolition is to be Thursday.

The winning organization is to be presented with The Golden Hammer.

Habitat for Humanity member Amber Miller said it has been a great experience.

“The experience was the best part; that and being able to go back to my own bed the next day,” said Miller.

Habitat for Humanity members were to build their own shack, but were not considered for awards.

“Since we won, we want to continue the streak,” said Lehman.

“It’s good community service and we like raising awareness of these countries,” said Lehman.

That was not Lehman’s only reason for doing the event, however.

“I enjoy the bonding with the other teams. It can be a great experience,” Lehman said.